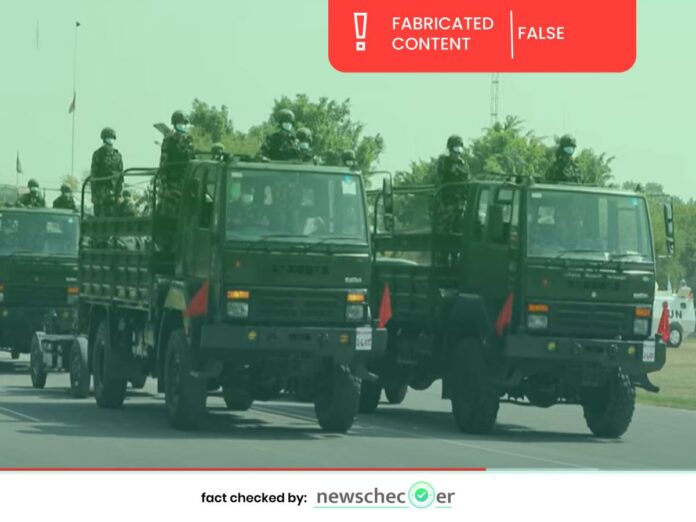 A video claiming that Gorkhali soldiers serving in the Indian Army have been recalled to Nepal and that China has given assurance to recruit those soldiers into its army has gone viral on TikTok. Newschecker found that the viral claim is fabricated.

TikTok user @manojthakuree7 posted a video, which shows visuals of military parade, and text superimposed on it reads, “Suddenly, Gorkhali soldiers serving in the Indian Army have been called in to Nepal. China calls on Gorkhali soldiers to be recruited into its Army.” Audio accompanying the footage is presented in a news bulletin style, and echoes the similar views.

The video posted on March 1 has been spreading fast, garnering 32.6k likes, 120 shares and 314 people have commented on it until the last count.

To check the veracity of the claim, Newschecker began by searching for reports of the Nepal government recalling Gorkha soldiers serving in India. We also searched for reports about China’s alleged assurance to recruit Gorkha soldiers into its army. But we couldn’t find anything like that.

Then, we took key-frames from the video and conducted a Google reverse image search and found a photo story, published on dainiknepal.com, carrying some pictures resembling the video. The photo story depicts moments of Army Day celebration, marked every Mahashivaratri festival.

The video claiming that the Nepal government has recalled Gorkha soldiers serving in India to Nepal, and that China has assured to recruit those soldiers is fabricated.