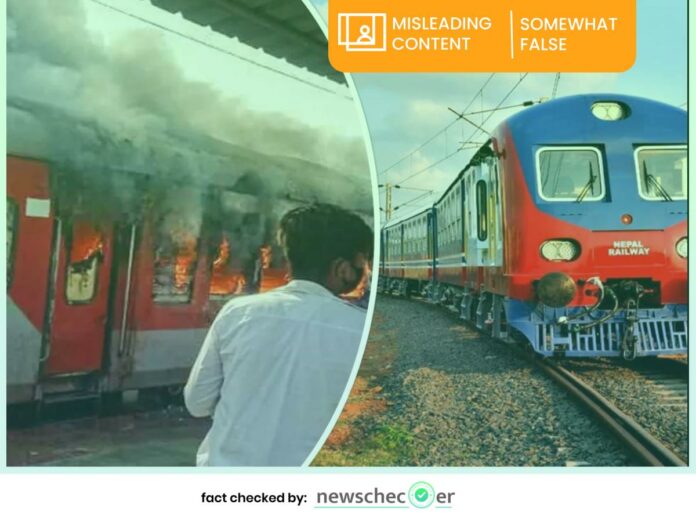 As Nepal’s Department of Railways is making the final preparations to kick-start the much-awaited train service along the Janakpur-Jayanagar route, a video allegedly showing one of the new trains engulfed in flames, has gone viral on the video sharing platform TikTok. Newschecker found that the video shows a recent train inferno incident in Madhuban railway station in India’s Bihar.

In this context, TikTok user maihuzafertera posted a video, which shows visuals of a train up in flames, and a still image with it, showing an image of a brand new train. Text on the video reads, “The plight of the new Nepali train,” while a Hindi song titled ‘Jo Bheji Thi Duaa’ is played in the background.

The video posted on February 20 is spreading fast, garnering 20.1k likes and 11191 shares until the time of publishing this article.

To check the authenticity of the video, Newschecker began by searching for the status of the new trains that are to be operated on Janakpur-Jayanagar route and found the most recent news report published in myrepublica.com, which says that the railway service will come into operation by third week of February. We found no reports of any trains going up in flames.

We then conducted a google reverse image search on the still image that was used in the video and found many similar images that identified it as  Nepal’s new train parked at Inaruwa platform in Dhanusha district.

Further, to check the original source of the viral video, Newschecker ran a google keyword search for ‘Train catches fire’, that showed several news reports and videos from the recent past. We found a video of a train catching fire at Madhubani railway station in Bihar posted by the Economic Times and India News on February 19, 2020, which matched the viral video.

On comparing the video posted on the YouTube Channel of India News with the viral video, we found that the visuals and the colour of the train of the two videos looked similar in many ways. According to the news report, three coaches of New Delhi-bound Swatantrata Senani Express were gutted in a fire at Madhubani railway station on Saturday morning (February 19). However, no one was injured in the inferno as the train was empty, the news confirmed.

The video claiming to show Nepal’s newly acquired train in flames is misleading, and is in fact a video from a recent train inferno incident in Madhubani station in India.