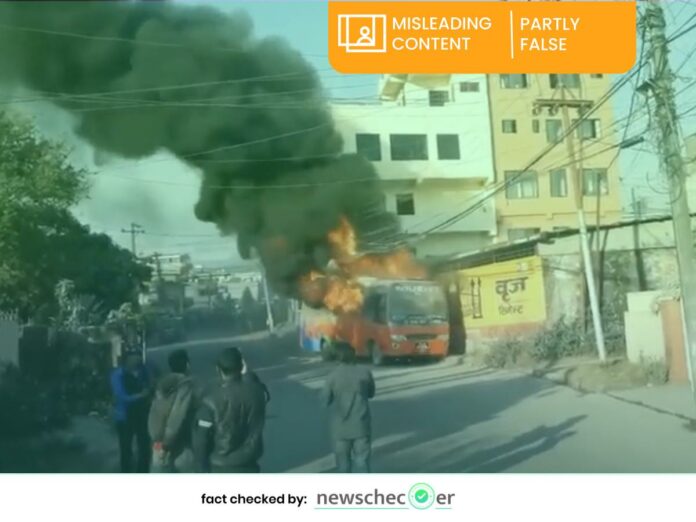 A video showing a bus in flames is widely being shared on social media with the claim it was torched by the cadres of the Communist Party of Nepal led by Netra Bikram Chand better known by his nom de guerre, “Biplov”. According to the viral post, the bus was allegedly set on fire during a nationwide general strike to protest the recent hike in prices of petroleum products. A fact check by Newschecker has found the claim to be false.

The Communist Party of Nepal led by Chand, a formerly outlawed Maoist splinter group, had enforced a nationwide general strike on November 16. The party joined the political mainstream earlier this year in March (2021) after agreeing to renounce violence and signing a three-point peace agreement with the government.

The text superimposed on the video claims, “The bus was torched for defying the strike. [See the plight of] My Country.” A patriotic song can also be heard playing in the  background of the video, whose lyrics go, “How can Nepali people exist without Nepal?”

The caption of the video posted by one Prateek Sharma reads, “The impact of Nepal Band early in the morning. Anyway, the bus shouldn’t have been torched.” The video has generated huge engagements with 7225 likes, 291 comments and 284 shares within 48 hours.

To check if the Chand-led Communist Party carried out any arson attacks during their nationwide general strike on November 16, Newschecker ran a google keyword search and found a similar video posted by a Youtube channel ‘Ugly Google’.

The video was posted on 21 July, 2021, with the title ‘Tourist bus caught fire in Pokhara, Nepal.’ However, the reason behind the fire has not been mentioned in the video and its description. The four minutes and 16 seconds video also shows a fire truck arriving on the scene and putting out the fire.

Newscheker also came across another video, posted on January 6, 2018, showing a bus fire being extinguished from a different angle. Our analysis of the two videos led us to the conclusion they were from the same incident.The colour of the bus, registration number and the location lend credence to the fact that they were the same incidents from different angles and timings.

On further research, Newschecker found a news article published on deshsanchar.com on January 6, 2018 with the title ‘Parked bus catches fire.’ The news report says that a parked bus caught fire in the Zero Kilometer area in Pokhara. “The bus (Na 5 Kha 7204) owned by Roadway Travels and operated in Kathmandu-Beni route had been parked on the side of the road for the past one month.”

However, the reason behind the fire had not been established then. The news report quoted police sub inspector Shiva Thapa that the reasons will be found after investigation.

Tuesday’s strike had passed off peacefully according to Senior Superintendent of Police Ashok Singh, chief at the Metropolitan Police Range, Kathmandu. “We had mobilised over 2,000 police personnel across the Valley to maintain law and order,” The Kathmandu Post quoted Singh in its report. “There were no reports of vandalism or property losses as the police detained those who were making such attempts.”

The TikTok video was taken out of context and shared online with the claim that the bus was set ablaze by the Chand-led communist party cadres for defying Tuesday’s strike.  There were no incidents of arson attacks in vehicles during the strike.

The Kathmandu Post: Chand’s banda is a dud, but the general public is at the receiving end