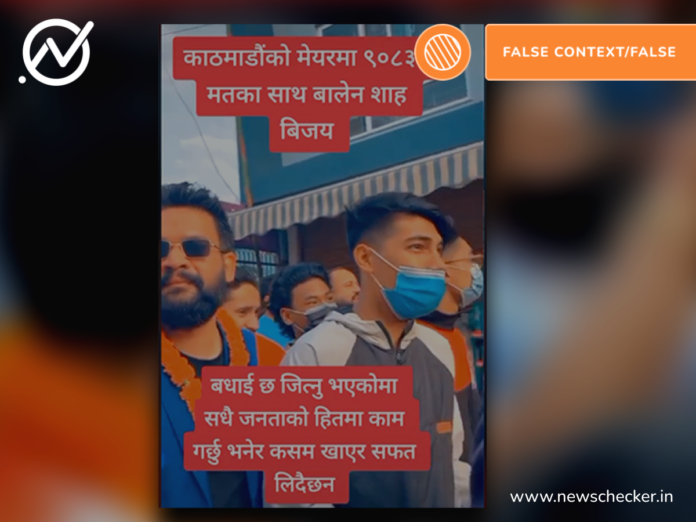 As the counting of votes in the recently held local body polls in Nepal continues, latest trends indicate that Balen Shah, the independent candidate contesting for the post of Mayor in Kathmandu Metropolitan City (KMC) is in the lead. Though Balen Shah leads by a huge margin against his closest rival Keshav Sthapit, candidate of the Communist Party of Nepal Unified Marxist Leninist (CPN-UML), it is too early to declare Shah’s victory in KMC. In this context, several videos claiming that Shah has won the mayor’s post in KMC with 90,800 votes, are going viral on social media platform TikTok.

Newschecker found that videos from Shah’s election campaigns are being used to make the false claim.

Shah, a rapper and structural engineer, is running for the post of KMC’s mayor as an independent candidate along with political heavyweights—CPN-UML’s Keshav Sthapit and Nepali Congress’s Shrijana.  Shah has been leading the count with a huge margin until the time of writing this article.

Kathmandu Metropolitan City is the Capital city in Kathmandu district of Bagmati Pradesh. There are 3,00,242 eligible voters for the Nepal local body elections in 2022, according to the Election Commission. There are 32 wards in the metropolitan city with a population of 8,45,767.

In this context, TikTok user @puskar___gairey posted a video, showing visuals of Balen Shah’s rallies in different places of Kathmandu with a superimposed text reading, “Balen Shah has won Kathmandu’s mayoral post. Congratulations to the independent candidate. Congratulations to everyone. Balen has secured the votes estimated before the elections. It’s time for the youth.” Audio accompanying the video presented in a news-bulletin style says, “Balen Shah has been elected the mayor of Kathmandu with 90,835 votes.”

While checking the original audio feature of TikTok, we found that 58 other videos were posted by using the same audio.

To check the veracity of the claim made in the video, Newschecker checked the Kathmandu Post online for the latest counting results of Kathmandu Metropolitan City and found that Shah is leading the count with 21,815 votes, leaving CPN-UML’s Keshav Sthapit trailing in the second position with 11,124 votes, and Nepali Congress candidate Srijana Singh securing 10,341 votes until the time of publishing this article. Out of 3,00,224 eligible voters, a total of 1,91,186 people cast their votes in Kathmandu.

Talking to Newschecker, Kathmandu district election officer, Thakur Prasad Bhattarai, said that only around 60,000 votes have been counted so far. That means nearly two-thirds of the total ballots cast are yet to be counted. “We are under immense pressure to complete the counting as soon as possible and it might take another few days as the counting is getting sluggish due to various reasons including the size of the ballot paper,” he said.

Our investigation makes it clear that the counting has not concluded as claimed in the video.

To check the source of the footage used in the viral video, we further conducted a search on YouTube using keyword ‘Balen Shah election campaign’ and found a video exactly matching the frames from the viral video. The video posted on a YouTube Channel named ‘Ak Vines’ was posted on May 3, 2022. The video caption reads, ‘Balen shah craze in kathmandu | Ready to win |No-one born to defeat you | Vote for Balen.’

However, we could not find the original source of the first footage in the viral video. On analyzing the footage, we can conclude that it was captured during Shah’s election campaign.

The viral video claiming that Balen Shah has been elected the mayor of Kathmandu Metropolitan City is false and footage used in the video is from Shah’s election campaign.