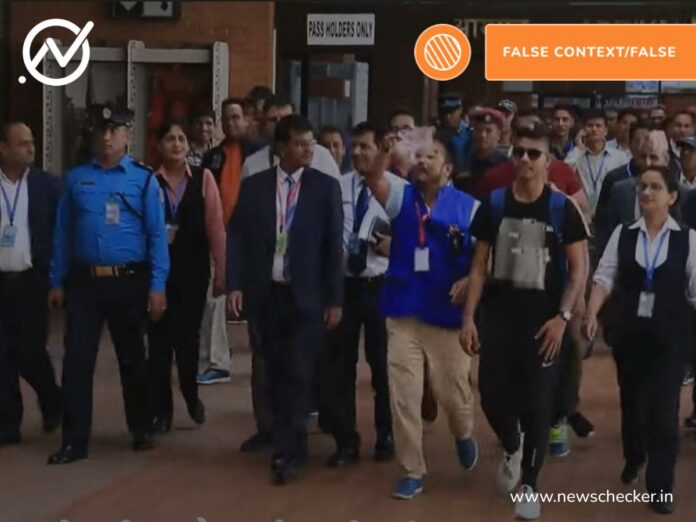 As Nepali national cricket team captain Sandeep Lamichhane faces allegations of coercing a 17-year-old girl to have sexual relations with him, many unverified claims linked with the Nepali cricketer are going viral online. In this context, several users are sharing a video claiming that Lamichhane, who was away from the country to play Caribbean Premier League (CPL), has arrived at Kathmandu Airport amid tight security, and his fans crowded the airport. Newschecker found that the videos were old and shared with false contexts.

The Cricket Association of Nepal suspended Lamichhane on September 8 after an arrest warrant was issued against him over an alleged rape case. A 17-year-old girl in the presence of her guardian lodged a rape complaint against Lamichhane at Gaushala Police Circle in Kathmandu. Lamichhane was in the West Indies with Jamaica Tallawash to participate in CPL 2022 when the case was lodged against him.

In his twitter response on September 9, Lamichhane asserted he is “innocent and ready to face all these base allegations” against him. “I have decided to take a leave from CPL and go back to my country within a few days,” he wrote.

According to Nepal’s Criminal Code 2017, anyone having sexual intercourse with a woman without her consent or, in the case of a woman below eighteen years of age even with her consent, shall be deemed to have committed rape.

Against this backdrop, TikTok user @yubrajbhandari posted a video, which shows a visual of cricketer Lamichhane being escorted at the arrival gate of Tribhuvan International Airport in Kathmandu by Nepal Police personnel. Text superimposed on the video reads, “Sandeep at airport amid tight security. His fans thronged the airport.”

The video posted on September 8 has garnered 130.1k likes, 363 shares and 1065 people have commented on it until the time of publishing this article.

Another TikTok user @satisfactionlamsal91 posted a video, which shows cricketer Lamichhane being welcomed with cheers by fans upon his arrival at Kathmandu International Airport. Text superimposed on the video reads, “Rape-accused Sandeep Lamichhane at airport.”

The video posted on September 9 has been liked 17.2k times, 194 people have shared it and 81 users have commented on it until the last count.

To check the veracity of the claim made in the first viral video, Newschecker conducted a search on YouTube using keyword ‘Sandeep Lamichhane Airport’ and found a video whose frame matched the viral video. The video was posted on the YouTube channel named Rato Khursani on May 22, 2018. We knew from the video caption that the footage showed Lamichhane arriving in Kathmandu after playing the Indian Premier League (IPL).

Further, we also noticed the logo of Rato Khursani in the viral video, lending credence to our finding that the footage is old and doesn’t show cricketer Lamichhane’s arrival after he was accused of coercing a minor girl to have sexual relations.

To check the authenticity of the claim made in the second viral video, Newschecker searched YouTube with the same keyword ‘Sandeep Lamichhane Airport’ which threw up several results. Taking the logo of Voice Nepal seen on the right corner of the video as a clue, we checked a video uploaded on the YouTube Channel named Satya Tathya and found a video matching the frames of the viral video. The video was also published on the YouTube channel on May 22, 2018. The video text read that Sandeep Lamichhane was being welcomed as he arrived in Kathmandu after playing IPL from Delhi Daredevils team.

We also found a news report, carrying an image matching the viral video, published in The Himalayan Times on May 22, 2018. The news report confirmed that Lamichhane returned to Nepal after playing in the IPL.

The videos claiming to show Sandeep Lamichhane arriving in Kathmandu after he was accused of having sexual relations with a minor girl, is old and shared with a false context.