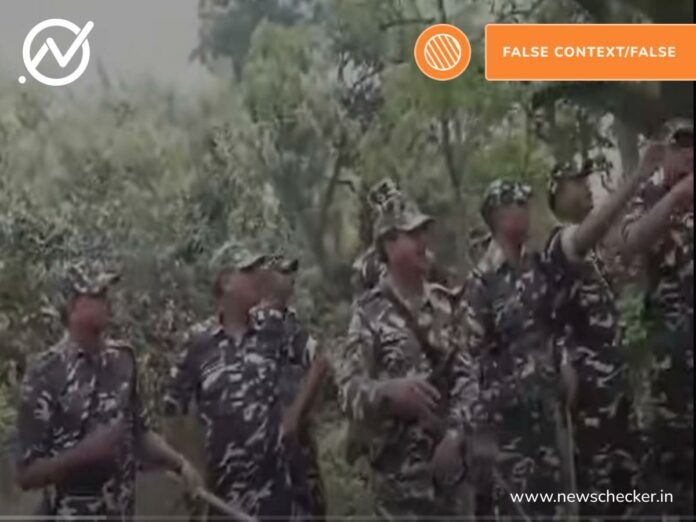 A 16-second video purporting to show a hostile situation allegedly after shots were fired unexpectedly at the Nepal-India border in Sarlahi district is going viral on TikTok. Newschecker found that the video is old and unrelated.

TikTok user @reshurajeshbist55 posted a video, showing visuals of India’s border security force Sashastra Seema Bal (SSB) personnel having an argument with another group. Text superimposed on the video claims, “Indian locals have moved a border pillar (226) at Lalpatti in Chinnamasta Rural Municipality-4, Sarlahi, and they are also attempting to move another pillar 268. Our leaders are turning a blind eye to it.”  The text further reads, “It would have been better if the government could make arrangements for a barbed wire fence along the border. These sorts of problems are on the rise at various border points between Nepal and India including Lipulekh and Limpiyadhura.”

“Suddenly, shots are fired at the Nepal-India border,” the audio is heard saying.

The video posted on August 8 has garnered 1,058 likes, 53 shares and 29 people have commented on it.

To check the authenticity of the claim made in the viral video, we observed the video closely and found that it contains two different footages: one showing a hostile situation, while the other showing border security forces of both Nepal and India near a border pillar.

We noticed a logo of Mero Pokhara TV on the video, following which Newschecker searched the YouTube Channel of Mero Pokhara TV and found a video whose frames exactly resembled the viral video. On checking the other videos posted on the channel, we found that the channel has posted a series of sensational and unsubstantiated content without attributing sources.

On checking the news report, we found that the video showed the disagreement between India’s border security force SSB and locals of Punarbas in Kanchanpur district of Nepal. The report further states that the conflict arose when the SSB removed the electric wire fence installed by Nepali locals to stop the movement of wild animals from the bordering Dudhwa National Park in Uttar Pradesh, India.

We then conducted a search on google using the key word ‘SSB removes wire fence in Punarbas’ and found the news published in the kathmandupost.com. The news item published in the Kathmandu Post on April 28 reported that the SSB had uprooted the electric fence installed at Punarbas to keep off the wild animals from entering the border settlement. However, there was no report of firing during the dispute.

The video purporting to show a recent dispute involving India’s SSB in Sarlahi district is false; the viral footage actually shows an old incident in Kanchanpur district from April 2018. There was no firing at the Nepal-India border.