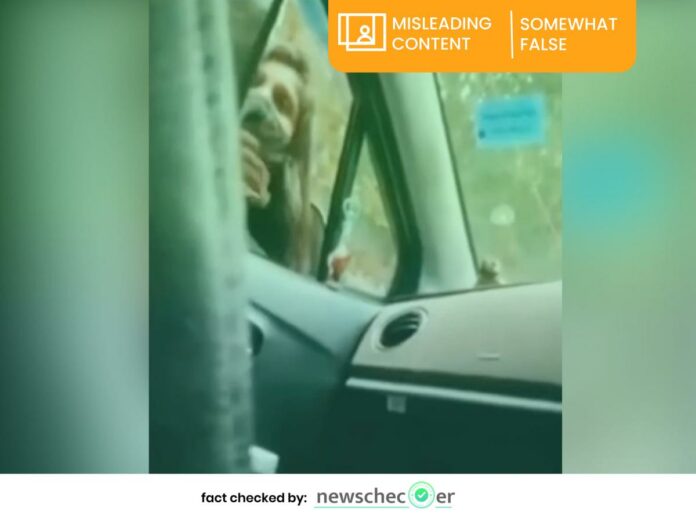 A video purportedly showing a girl inside a vehicle, attempting to swindle a man in a car by threatening to frame him for misbehaviour on the pretext of offering her a lift, has gone viral on TikTok. Posts on the social media platform claimed that the incident took place at Nepal-India border in Birgunj. A fact-check by Newschecker found that the video is not from the Nepal-India border but is from India.

A TikTok user zain.sahjada786  posted the video, which shows a woman asking the person driving the car to hand over all the money and valuables he had on himself. When the man asks the woman to back off, she says, “If you don’t do as I say, I will cry for help and tell the people that you misbehaved with me on the pretext of offering a lift.”

Then the man says, “Please relax, just a minute.” The woman retorts, “What relax? If I start crying, then you will realise what relaxing will be like.”

The man says, “Are you threatening me?”

The woman replies, “Yes, I am threatening you. Say what will you do?”

The man is then heard asking, “Is this what you do by asking for a lift?”

And the video abruptly stops as the two start arguing after the man refuses to oblige the woman.

Texts on the video read, “Car lift episode at Nepal-India border on the way to Raxaul from Birgunj in Nepal.” The texts further read, “This kind of woman is a disgrace to all women. Think twice before offering a lift to anybody.”

The video, posted on December 2 has generated huge engagements with 1124 likes, 67 shares and 15 comments.

The video claims that the incident happened on the way to Raxaul from Birgunj. So we began our search by conducting a Google keyword search for “girl asking for lift” and found several videos of a longer version capturing the same episode.

The first video posted on YouTube on October 3, 2021 on a channel named Engineers Official had a clip of the incident seen on the TikTok video. In the 4.13-minute video, the girl stops the car and asks for a lift to the nearest “metro station” claiming she lost her wallet and had no money on her.

But before the girl asks for the lift, the driver can be seen asking another person, apparently filming the incident, to hide in the back seat of the car.

The video shows the girl chit-chatting with the driver before telling him to stop and threatening him. We found that the clip used by the TikTok was taken from the Youtube Video.

We found another shorter clip of the same video on YouTube posted on October 7, 2021 by Rao Sarad Vlog.

Newschecker’s attempts to find the original source of the video did not yield any results.

The video showing a girl trying to swindle a car driver by threatening to frame him for misbehaviour did not happen at the Nepal-India border in Birgunj. The viral video was taken out of context from a YouTube video published in October 2021.