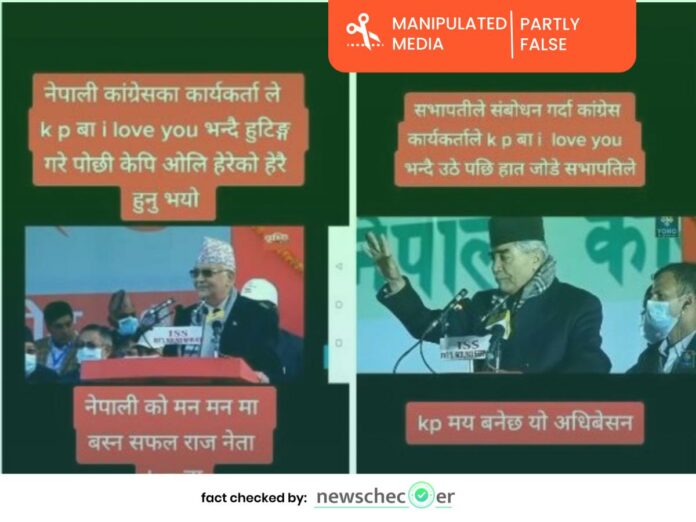 The 14th General Convention of the Nepali Congress party kicked off at Bhrikutimandap in Kathmandu on December 10 to elect the party’s new leadership.  The convention is being attended by thousands of party delegates, cadres, and well-wishers.

In addition, leaders of other major political parties and foreign delegates also delivered their speeches at the jamboree. In this context, videos claiming that Nepali Congress party cadres chanted the slogans, “KP Ba [Father] I Love You, I Love You,” during the ongoing general convention, have drawn many engagements in the popular short video sharing platform TikTok. The audio clip has been used by 22 TikTok videos.

In a video posted by user santoshpokhrel40, a crowd is  heard chanting “KP Ba I Love You, I Love You, I Love You,” while the camera rolls  and stops at CPN-UML Chairman KP Oli. The video, shared 867 times, has garnered 47.3k likes and 1070 comments until the time of publishing this article.

Texts superimposed on the video read, “KP Sharma Oli was surprised when the cadres of Nepali Congress chanted the slogan, “KP Ba I Love You.”  The texts referring to Oli further read, “Nepal’s statesman who has won the hearts of Nepali people.” The video caption reads, “People can be a well-wisher of a party but can’t always be against another person. This convention has clearly demonstrated this fact. Long Live Ba [KP].”

Similarly, the same handle has posted another TikTok video that shows the Prime Minister and Nepali Congress President asking the crowd  to keep silent as they continued to chant the same slogan. ” Texts superimposed  on the video read, “President Sher Bahadur Deuba pleaded to stop when his party cadres chanted the slogan, “KP Ba I Love You.”

This video, shared by 321 users, generated 15.4k likes and 278 comments at the time of publishing this report, is targeted against the Nepali Congress and the party’s incumbent president Deuba.

To establish the truth behind the videos, Newschecker searched the internet for videos of the Nepal Congress General Convention.

As we noticed the video contains the logo of Drishti News, we searched the news outlet’s webpage and its Youtube Channel. Using the clues found so far, we closely observed a YouTube video showing Oli’s address at the program. Then we came across a view similar to the one seen in the viral video at the 42.50-minute timestamp.

Then we checked for other TikTok videos using the same audio clip. We found that the audio clip was first used by a TikTok video on February 4, 2021 in which the cadres of CPN-UML are seen chanting the slogan. This gave us the hint that the audio was from a demonstration when the cadres of then ruling CPN-UML had organised rallies in Kathmandu to express solidarity with his decision to dissolve the House of Representatives and announce early elections.

Searching further we found a video shared on Facebook on February 4, 2021 which had a logo of popular Nepali news portal, Setopati.com. And finally we came across a twitter post of Setopati with the viral audio of a mass chanting in support of Oli.

We also searched for Deuba’s speech during his party’s convention to check whether the NC cadres chanted slogans in support of Oli. We found a video posted on the YouTube channel of Nepal Details with the original audio of Deuba’s speech where no such slogan can be  heard . What can be heard, however, is some chanting in the distance praising the Nepali Congress party. On top of that, Deuba can be heard requesting his cadres to stop when they chant slogans in his support.

Newschecker found that the videos were manipulated  by using an old audio clip, and presented out of context. The audio of slogans being chanted  in support of Oli is not from the ongoing general convention of Nepali Congress but from a rally organised by his party UML’s cadres to express solidarity with his decision to dissolve the House of Representatives and announce early elections in February 2021.