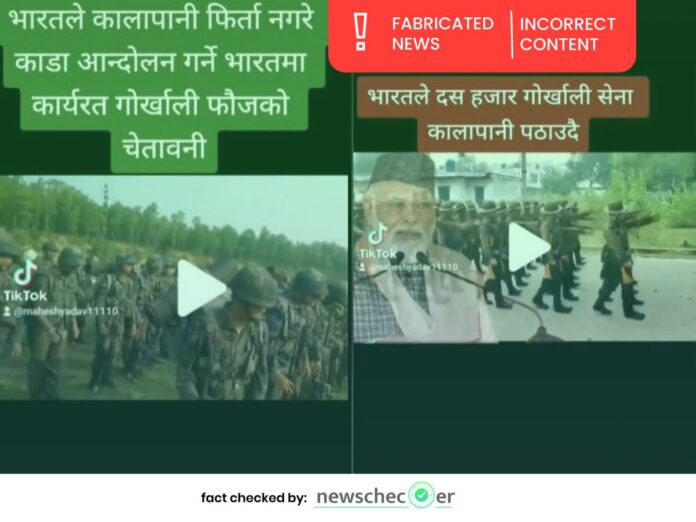 In the wake of territorial dispute between Nepal and India over the Kalapani region, several videos are going viral online with unsubstantiated and  fabricated claims. Newschecker found at least two such videos making far-fetched claims without any attribution. One of the videos on TikTok claims that  Indian-Gorkha soldiers have warned of a stern protest if India doesn’t return the Kalapani region to Nepal, while  the  other says that India has deployed 10,000 troops of the Gorkha regiment  at the Nepal-India border.

The videos were posted by TikTok user maheshyadav1m (Mahesh Yadav). One of them, posted on January 18, shows visuals of Indian army personnel marching in a parade followed by  visuals  of army men training. Text superimposed on the video reads, “Gorkha soldiers to launch a stern protest if Kalapani not returned to Nepal.” Audio clip accompanying the video is heard saying, “Gorkha soldiers serving in the Indian army have issued a stern warning to the Indian government. They have warned of protests if the Indian government doesn’t return the Kalapani region to Nepal. The soldiers have said that they can’t fight on behalf of India, and watch injustice done to their motherland.”

The video has spread fast on social media, garnering 26.6 likes, 369 comments, while 327 users have shared the video.

The other video, posted on January 18, claiming that India is all set to deploy 10,000 soldiers at Kalapani has been going viral on TikTok. The voice over in the video is heard saying, “India deploying 10,000 Gorkha army to Kalapani, Gorkha soldiers living in India made a terrible revelation.” The video is posted by the same user maheshyadav1m (Mahesh Yadav) and is also spreading fast with 12.2k likes. The video has been shared 64 times and 61 people commented on it until the time of publishing this article.

Newschecker further looked for the original source of the audio used in the viral post, which is presented to appear like  a news bulletin  on the radio or television. We ran a keyword search for ‘Nepali Gorkha Kalapani’ on YouTube that led us to a video posted on YouTube channel named ‘Greater Nepal TV’ which has many videos with sensational claims. On checking the channel, we found a video with an audio clip containing a detailed report of the claim made in the first video.

“Nepali Gorkha soldiers serving in the Indian Army have opined that India should unconditionally return Kalapani to Nepal as the historical documents, agreements and treaties have shown that the territory belongs to Nepal,” the YouTube video is heard saying, quoting what it claims to be a Gorkha soldier deployed in Indian administered Kashmir. The video further claims that a senior Gorkha soldier, seeking anonymity for security reasons, told the channel that they will launch a stern protest in India if the latter doesn’t stop encroachment of Nepali territory and provide justice to Nepal.

To further check the authenticity of the other video we sieved through the various videos posted by Greater Nepal TV’s YouTube channel  and  found an undistinguishable video posted in the channel on 18 January 2020. Bizarrely, the video shows footage of Indian Prime Minister Narendra Modi and Defence Minister Raj Nath Singh addressing various programs regarding the Kalapani-Lipulekh road connecting Mansarovar in Tibet, China.

Newschecker decided to check the content that was shared on the YouTube channel. We found many videos that made similar unsubstantiated and far fetched claims. One of the YouTube videos posted by the channel on January 9, 2022, claimed that the US army personnel under its Millennium Challenge Corporation aid project and Indo-Pacific Strategy have started arriving in Nepal.  “The American soldiers have been imparting training to Nepal Army personnel under various pretexts, a reliable source said,” the news clip is heard saying. The claim is without basis and footage shown in the video is not of the US army in Nepal. We found the video using some images from the handover ceremony of the Far West Blood Bank Centre in Dhangadhi, Kailali district that took place in July 2021. US army personnel are also seen attending the event as the blood bank was built with funding from the American people through the US Department of Defense to provide blood services in the region.

We checked more videos, and found another video posted on January 4, 2022 with the title ‘Sudden arrival of Bangladesh Army in Nepal creates discussion’. The news was about an exchange visit of a 29-member Bangladesh Army team led by Lt Col Syed Mohammad Nurus Saleheen Yousuf. However, Newschecker found that Bangladesh Army personnel, along with other foreign armies, visited Nepal in November last year to attend the counter-insurgency and jungle warfare training. The low-key regular training could have been blown out of proportion by the video, which has not attributed any sources.

Thus, Newschecker  investigation revealed that the YouTube channel, Greater Nepal TV, is a habitual offender, sharing unsubstantiated and sensationalised claims, passing them off as legitimate information by presenting them in the format of a news bulletin.

Videos claiming that Nepali Gorkha soldiers serving in Indian Army have warned of a stern protest if India doesn’t return the Kalapani region to Nepal is fabricated, and taken from a YouTube channel dedicated to posting sensational contents.