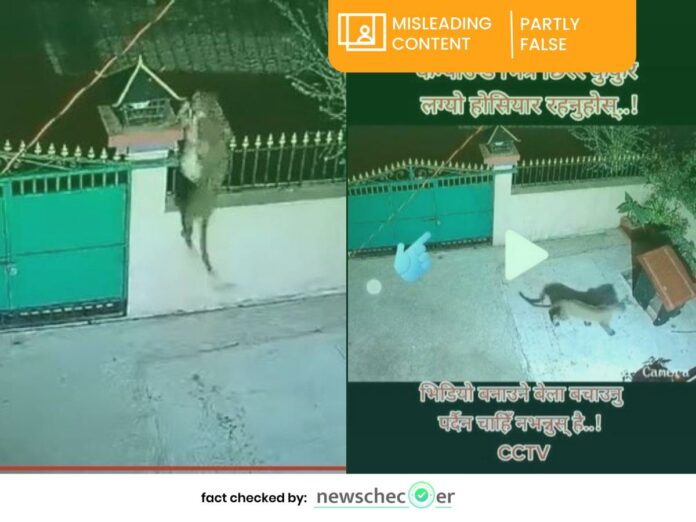 A video clip of a leopard entering a private residence compound and jumping off the compound wall with a pet dog clenched between its jaws has gone viral with conflicting claims regarding the location of the incident. Newschecker found that the shocking incident took place at a house in Sundar Bazar Municipality in Lamjung district.

One YouTube Channel named Hamro TV Nepal posted a video of CCTV footage captured at 1.45am on December 13. The video caption reads, “Tiger entered a house and took away a dog in Kathmandu.” The footage shows a dog inside a house compound at night and shortly after a leopard enters the premises by climbing the gate and moving towards the house. And a few seconds later the predator rushes out of the wall by grabbing the dog in its jaws.

One TikTok user suresh_singh_1987 posted the video on December 14, claiming that a leopard took away a pet dog in Kathmandu. The video caption reads, “Last night a leopard carried off a dog from a house compound.” The post has been spreading fast on TikTok garnering 261.2k likes, 7842 comments and 18.3k shares until the time we published this report.

After finding conflicting claims about the location of the incident on social media, we decided to conduct a fact-check on the video. We ran a search with relevant keywords on YouTube to check if there were similar videos available online.

Our search led us to another identical video on YouTube posted by an account named ‘Talent Promotion’ on December 15. The video caption claimed that a dog barged into a house and took away the pet dog. “Please don’t say, why didn’t you save [the dog while filming]. It was caught on CCTV,” reads the caption.

Newschecker found yet another video posted on YouTube on December 14, claiming that the incident happened in Chitwan. As we came across the conflicting claims about the exact location of the incident, we reached out to Hari Bhadra Acharya, Chief of Chitwan National Park, to enquire about any such incidents. Acharya said the incident didn’t happen in Chitwan. “The video is being falsely shared as from Chitwan,” he added.

Talking to Newschecker, Lamjung correspondent of Nepal’s popular national daily Kantipur, Aash Gurung confirmed that the incident happened in Sundar Bazaar-7. He said the incidents of leopards straying from their habitat into human settlements and preying on domestic animals are not new for the district.

Newschecker found another TikTok video posted by handle magaranita0, which showed the same incident  captured from a different angle. The user claimed that the incident took place in Lamjung.

We contacted the TikTok user Anita Thapa (magaranita0) by phone, who clarified that the incident took place in Lamjung. “The incident happened at my parents’ residence in Sundar Bazar Municipality-7 in Lamjung district,” Thapa told Newschecker. She added that she posted the CCTV footage on her TikTok account to warn the people not to be completely assured of safety. “No matter how safe our house compound wall is, our houses are prone to visits by leopards,” she said.

The viral video of CCTV footage showing a leopard entering a private residence and jumping the compound wall with a pet dog in its jaws was from Lamjung.