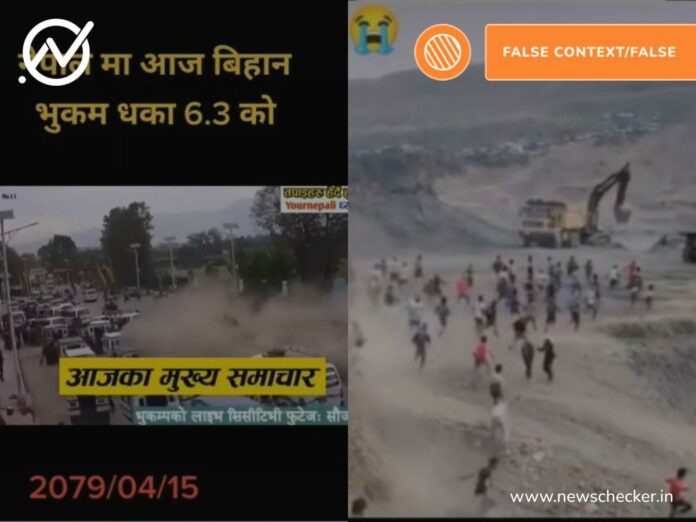 An earthquake measuring 6.0 magnitude on the Richter scale struck Nepal on July 31 with its epicentre in the eastern district of Khotang. The shockwaves of the quake that was recorded at 8:13 local time were felt as far as India’s West Bengal. In this connection, two videos purporting to show the impact of Sunday’s earthquake in Nepal are going viral on TikTok. Newschecker found that the videos are unrelated and old.

Nepal lies in one of the most seismically active regions of the world, with a long history of earthquakes. In 2015, a 7.6-magnitude earthquake struck Nepal in which around 9000 people lost their lives, many thousands were injured and hundreds of thousands of structures were destroyed.

Against this backdrop, TikTok user @khotange_kto1 posted a video, showing scores of people running down a steep hillock, clearing out from what appears to be a mine. One can also see excavators and trucks in the frames. Text superimposed on the video reads, “People running helter-skelter in Khotang after today’s earthquake.”

The video posted on July 31 has garnered 70k likes, 588 shares and 1,039 users have shared it until the time of publishing this article.

Another TikToker @sukaritmahato posted a video, showing visuals of people running for their lives after a structure collapsed sending a cloud of dust. Text superimposed on the video reads, “An earthquake of 6.3-magnitude jolts Nepal this morning, 2097/04/15 (July 31, 2022). Today’s main headlines.”  Audio accompanying the video presented in a news bulletin style says, “A huge earthquake rocked Nepal, causing devastation everywhere. A comprehensive detail about the devastation caused by the quake in Bhojpur, Haleshi and Kathmandu.”

The video posted on July 31 has been liked 34.3k times, shared 178 times and 175 users have commented on it until the last count.

To check the veracity of the claim made in the first viral video, Newschecker took several keyframes from the viral video and conducted a google reverse image search. However, we didn’t find any results corresponding to the viral video.

We further conducted a Google search using the keyword ‘people run down a slope in a mine’ which threw up several results. The results pointed us towards the famous jade mine in Myanmar where the local people are engaged in collecting precious stones. Taking it as a clue, we conducted the search on YouTube using keyword ‘jade mining in Myanmar’ and found several videos matching the viral video.

On checking a video posted on the YouTube channel of LuAi nO, whose frames matched the viral video, Newschecker found that it showed people flocking to Kachin state in Myanmar to scavenge the rubble in the hope of finding fragments of jade. But we were unable to trace the original video matching the viral video. Comparing the visuals in the LuAi nO with the viral footage, we can say that the viral video is from Myanmar’s Jade mine.

Thus, our findings clearly illustrate that the viral video doesn’t show the people running in Nepal due to an earthquake on Sunday.

On analysing the second video, we noticed a logo of a YouTube channel named Your Nepali Channel. On further checking the YouTube channel, we found a video whose frames matched the viral video. On analysing the videos posted in the Channel, Newschecker found that its contents are unsubstantiated and sensational.

As the visuals seen in the video resembled the scenes of Kathmandu, we searched YouTube using keyword ‘earthquake Kathmandu’ and found a video whose frames from a 0.19-minute time-stamp exactly matched the viral video. On checking the video, Newschecker found that the video shows a compilation of CCTV footages from Kathmandu when the devastating earthquake struck Nepal in April 2015. The Channel named ‘Awara Musafir‘ posted the video in May 2015.

Our findings make it clear that the second viral video actually shows the moment in Kathmandu when a devastating earthquake struck Gorkha district of Nepal in April 2015, and it is unrelated to Sunday’s quake.

The viral videos claiming to show the impact of Sunday’s earthquake in Nepal are old and unrelated.