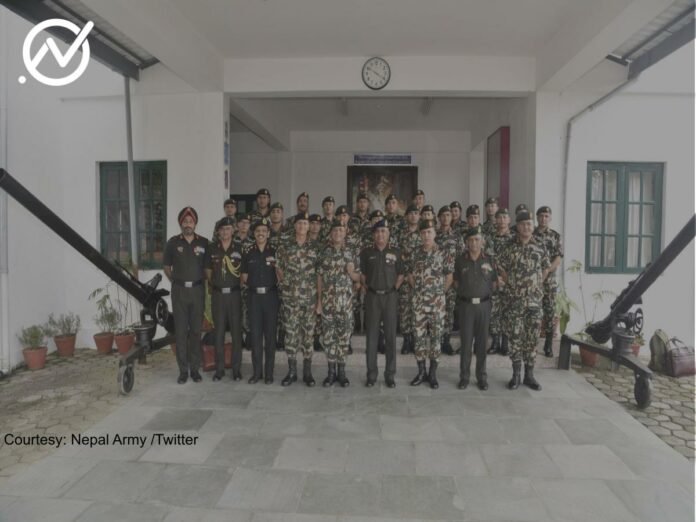 The Indian government’s Agnipath scheme to recruit 46,000 youngsters, called Agniveers, in the armed forces for a fixed term of four years has been hotly debated since its launch in June. Aimed at curbing expenditure on Indian army’s salaries and pensions – which account for half of its budget – the scheme’s announcement was met with protests supported by opposition parties in India. In Nepal too, the scheme captured headlines after India reportedly sought Nepal’s approval for the selection and recruitment of Butwal and Dharan from August 25 onwards and requested for security support in the area.

Why has the recruitment of Nepali youths been halted?

The recruitment process is on hold for now as Nepali officials say they were not informed in advance about the recruitment scheme by the Indian government and that the matter should have been discussed with Nepali side before launching the scheme. There has been much debate reported by Nepal’s mainstream media on whether this new scheme is covered under the tripartite agreement of 1947 signed by Nepal, India and the UK.

India used to recruit approximately 14,00 soldiers annually before the pandemic. But the recruitment of Gorkha soldiers into the Indian army had been halted since 2020 due to the onset of Covid19 pandemic.

In addition, there are concerns in Nepal over the short-term hiring of the youths. For instance, only 25 percent of youths recruited under the scheme would be retained for a full-term service upon completion of the four-year tenure, while the remaining 75 per cent who will retire after four years and will get a one-time Seva Nidhi Package of Indian Rupees 1.71 million. The short tenure was cited by Foreign Minister Narayan Khadka in his meeting with the Indian Ambassador to Nepal, Naveen Srivastava, as one of the reasons to discuss the matter with  “ the political parties and all concerned.”

Gorkha soldiers from Nepal have been an integral part of the Indian Army for over seven decades. Around 32,000 Nepalese Gorkhas currently serve in the Indian Army’s seven Gorkha Rifle regiments (1st, 3rd, 4th, 5th, 8th, 9th and 11th)—six of which were transferred from the British India Army while one was formed after India’s independence from Britain, according to India.com.

The East India Company started recruiting Nepali youths in 1816, a practice which was later continued by the British Army. After India’s independence in 1947, a tripartite agreement between Nepal, UK and India decided to continue the recruitment of Nepali soldiers.

“The Agnipath scheme violates the Tripartite Agreement signed at India’s independence which stipulates that pensions and other financial benefits be given to Gorkha soldiers as per the Indian Army Pay Code,” Nepali Times online has quoted senior advocate Yuvraj Sangraula as saying.

Gorkha soldiers have fought heroically in wars fought by the Indian army after independence. According to data at the Indian Embassy in Kathmandu, there are nearly 122,000 retired ex-Indian army pensioners in Nepal.

What does the visit of the Indian Army Chief entail?

Indian Army Chief General Manoj Pande returned home on September 8 after completing a five-day official visit to Nepal. During his visit, General Pande held a series of official meetings with Prime Minister Sher Bahadur Deuba and Nepal’s Army Chief, among others.  Though General Pande was expected to have held discussion on reservations about the Agnipath scheme with Nepali leaders and military officials, no details regarding what transpired during his meetings with Nepali leadership came out. The Indian Army General also held meetings with Indian army veterans from Nepal and appreciated their role in enhancing the ties between the two countries.

The recruitment of Nepali youths under the scheme is not off the table yet.

According to Nepal’s Ambassador to India Shankar Prasad Sharma, talks are underway between India and Nepal over the recruitment process of Gorkhas under India’s Agnipath scheme. “Nepal has stopped Agniveer recruitments for a while as they are negotiating, talking with different political parties. A decision will be made soon,” he told ANI.

Sources close to Foreign Minister Khadka have confided to the media that the issue has not been completely brushed aside from consideration and that Nepal will reach out to India once a broader understanding is forged after consultations with the concerned stakeholders and the political parties.

What are the positions of Maoists and ex-Gurkhas?

The CPN (Maoist Centre) has always been against the recruitment of Nepali soldiers into foreign armies. Prior to launching their armed rebellion in 1996, the former rebel party had put forth a 40-point list of demands, one of which was to end the tradition of recruitment of Nepali youths into British and Indian Army.

Moreover, some Gurkha veterans have been expressing worries about the government decision to stop the recruitment of Nepali youths into the Indian army. They are concerned that the future of around 13,000 Gorkha hopefuls have been put into uncertainty and it might cause a loss of  national income.

What are other concerns?

There are also concerns that the short stint of Nepali youths, who will be armed with military skills after their service as Agniveers, might pose a security threat in a country that is getting over the scars of violence due to a decade-long armed insurgency. It is learnt from the media that during a meeting with Indian Ambassador to Nepal Naveen Srivastava, Foreign Minister Narayan Khadka had said that those who retire after serving in the Indian Army for four years might be misused and they could pose security threats to Nepal.

What plan does India have?

It seems that India is now considering withdrawing vacancies for enlisting soldiers from Nepal under the new military recruitment scheme in case the landlocked Himalayan country fails to take a decision on time.

Responding to a question at a session in the United Service Institution of India, General Pande said the vacancies allocated to Nepali Gorkhas will have to be “redistributed” to others for the time being if Kathmandu doesn’t allow recruitment of Nepali youths as per the scheduled dates, according to a Times of India report. General Pande, who recently visited Nepal, said he reckoned that Nepal is not likely to take any decision regarding the issue before the general elections slated for November 20.

Meanwhile, Nepal’s Ministry of Foreign Affairs on September 15 said that a decision on the Agnipath scheme will be taken after the formation of the new government following the federal and provincial elections slated for November. Foreign Ministry Spokesperson Sewa Lamsal during a press conference in Kathmandu said that chances of an immediate decision on the scheme are slim.

Sanjeeb Phuyal
Sanjeeb Phuyal is the Nepali Editor of Newschecker based in Kathmandu, Nepal. He brings over a decade of experience writing and editing breaking news and features on Nepali politics, society, environment and current affairs. Most of his work appeared in Kathmandu Post, where he spent over ten years leading and managing the online team and putting innovative ideas into practice. Besides overseeing daily news, features and visual journalism, he’s also translated and edited content. With the growth of social media platforms—and the ever-growing competition amongst media outlets to churn out breaking news, he feels that fact-checking every piece of news and information has become essential today than ever before.
Facebook
Twitter
WhatsApp
Linkedin
Previous article
Old Videos Of Cricketer Lamichhane Arriving At Kathmandu Airport Shared With False Claim
Next article
Viral Video Claiming To Show Automatic Garbage Truck Bought by Kathmandu Mayor Balen Is False