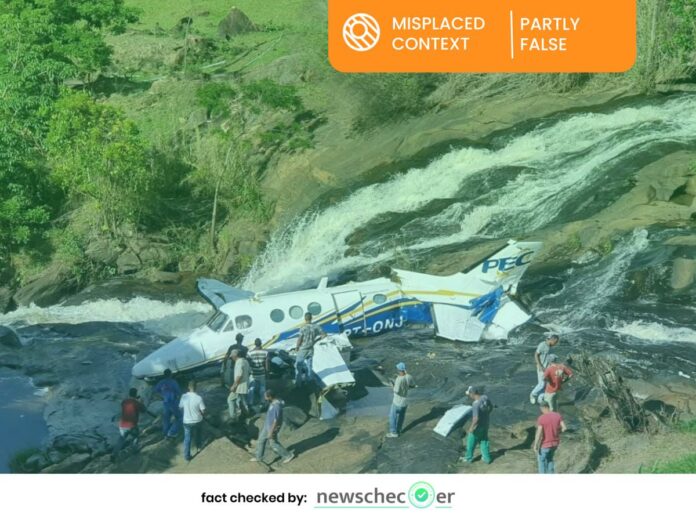 A video purportedly showing the wreckage of a Buddha Air aircraft that crashed at Khare Khola soon after it took off from Kathmandu at 3 pm is going viral on TikTok. Newschecker found that the footage is actually from the November 5 crash of a small aircraft in the Brazilian state of Minas Gerais and falsely shared as the crash of Buddha Air plane.

TikTok user arjubansnetofficial (Arjun BasnetOfficial) posted a video claiming to show footage of wreckage of a Buddha Air plane at a small river somewhere in Nepal. Texts superimposed on the video read, “A Buddha Air plane that took off from Kathmandu at 3pm crashed at Kharkhare River. Please watch the news on Nepal News at 44 thank you.”

Audio clip laid on top of the video is heard saying, “Oh my god! A big accident has happened.”  The video posted on December 29 has generated a lot of reactions with 39.7 likes, and 762 shares on TikTok until the time of publishing this article.

The video has gone viral creating a panic among the people in Nepal which has a dubious track record for air safety because of its challenging terrain.

To check the authenticity of the claim made by the viral video, Newschecker began by a reverse search by using a keyframe from the video. The search led us to many images and videos resembling the frames seen on the viral video.

The search brought several media reports and videos of the tragedy that happened in the Brazilian state of Minas Gerais on November 5.

As we compared the viral video with the crash video of Brazil carrying the singer, we found the two videos indistinguishable. Here we can see the similar video showing the crash site in Brazil posted by one YouTube Channel WORLD APOCALYPSE.

Newschecker also found a Reuters report which said that five people including Brazilian country singer and 2019 Latin Grammy winner Marilia Mendonca, her producer, her advisor uncle, and both the pilot and co-pilot of the plane had died in the crash. The singer was on her way to a concert in a small city of Caratinga, 220 miles north of Rio De Janeiro when the accident took place.

We also found that the audio used in the viral video was from a July 2021 incident of a landslide at Narayangarh-Mugling road, where loose rocks and soil rolling down a steep slope hit a moving vehicle.

The viral video claiming to show the wreckage of a Buddha Air plane that crashed into a river is falsely shared as a tragedy in Nepal. The viral footage was from a crash involving a Brazilian star singer Marilia Mendonca that happened in Brazil in November.

The Guardian
Reuters
On Demand News