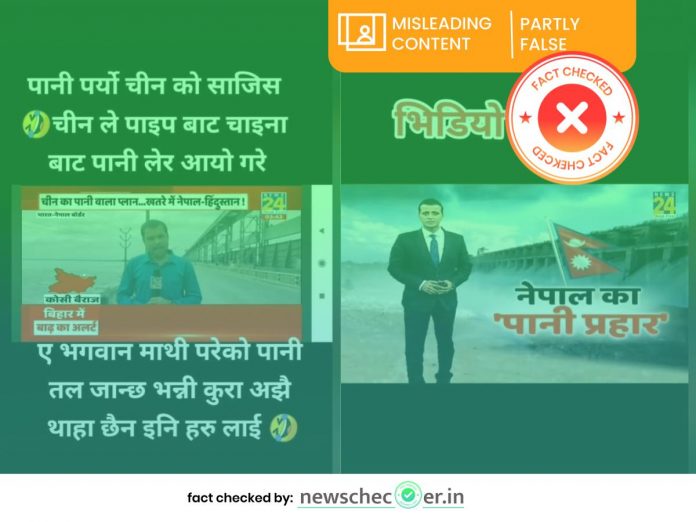 Do China and Nepal have anything to do with floods in Bihar and parts of Uttar Pradesh this week?

Prominent Indian TV channels like ABP News, Aaj Tak and News 24 alleged that the floods which claimed 16 lives in Nepal and endangered many lives in India happened due to Nepal releasing water into rivers Gandak (Narayani) and Kosi which caused further Inundation.

In addition, TV channel News 24 called it a ‘water attack’ by Nepal claiming it was done ‘with the backing of China’. In a report dated June 16th, 2021 from the Koshi barrage near the Nepal-India border, their correspondent claimed that China and Nepal are developing six hydropower projects in Kathmandu’s northeast district, Sindhupalchok and have diverted 11 rivers.

News 24’s video clips have gone viral amongst Nepali TikTok users, most of whom have criticized the media for its “inaccurate and baseless reporting”. Which prompted our investigation into these claims.

Did Nepal Deliberately Release Water Into Gandak And Kosi Rivers?

Newschecker’s investigation shows that the flooding in Nepal and north Indian states of Bihar and UP occurred due to sudden heavy monsoon rains in the Himalayan districts of western and central Nepal on and after June 15.

According to Nepal’s Weather Forecasting Division, Department of Hydrology and Meteorology, a low-pressure system remained over central Nepal during June-13-16, causing record rainfall of up to 214 millimetres on June 15 in the western Syangja district of Nepal.

We also found one of the screenshots of News 24 which is being shared on TikTok is 2 years old.

The video can be seen below. This show was broadcasted on 13 July 2020.

Information Officer at Nepal’s Ministry of Energy, Water Resources and Irrigation Babu Raj Adhikari told Newschecker: “The Koshi and Gandak barrages are looked after, repaired and operated by the Indian officials as per the bilateral agreements. Nepali officials have no role in opening or closing the gates.”

The water resource department in Bihar confirmed to Newschecker that India operates the barrages.

Hindi news website, Hindustan also reported an official from the Maharajganj Irrigation Department, Rajiv Kapil, saying that they lifted 36 floodgates of the barrage.

The special report broadcasted by News 24 on 16th June claimed that China is developing six hydropower projects in Kathmandu’s northeast district, Sindhupalchok, along with Nepal. It also alleged that Nepal had diverted 11 rivers which in turn is affecting India.

Nepal’s Ministry of Energy, Water Resources and Irrigation has denied this claim, with its Information officer Babu Raj Adhikari calling them ‘completely false and inaccurate.”

Sinohydro, a Chinese construction company, is involved in one project in Sindhupalchok, which borders Tibet, a drinking water diversion project in the Melamchi river basin, but that, too, got severely affected by this week’s landslides and floods.

In the past, Sinohydro won contracts to develop parts of two hydropower projects in west and east Nepal, including Upper Marshyangdi, and Upper Tamakoshi, but not in Sindhupalchok as claimed by News 24.

The claims made by the Indian channel, News 24, suggesting China and Nepal have a hand in current floods in north India are false.