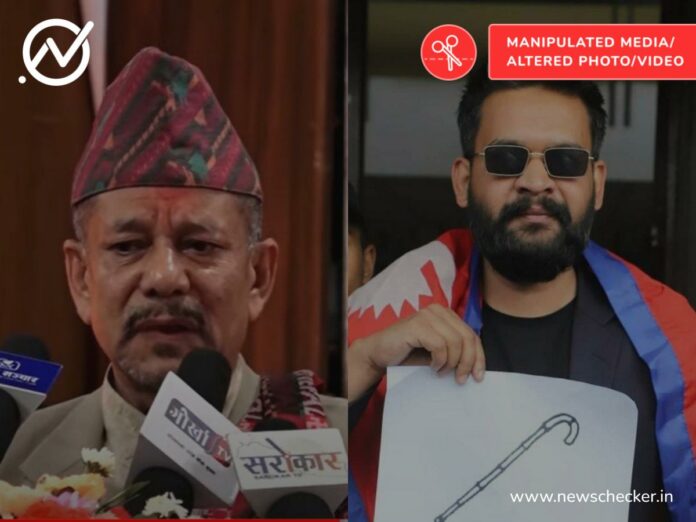 Nepal is gearing up to hold local body elections in all 753 local units across the country on Friday (May 13). Ahead of the polls, a video purportedly showing Keshav Sthapit, CPN-UML’s (Communist Party of Nepal Unified Marxist Leninist) Mayoral Candidate of Kathmandu Metropolitan City (KMC), praising his rival independent candidate Balen Shah has gone viral on social media platform TikTok. Newschecker found that the video was manipulated.

Kathmandu Metropolitan City (KMC) is one of the most keenly observed constituencies as the capital city of the country. Keshav Sthapit is one of the three political heavyweights, along with Nepali Congress candidate Shrijana Singh, and independent candidate Balen Shah, a rapper and structural engineer, running for the post of mayor in KMC.

Against this backdrop, TikTok user @rahasya_bikram posted a video, that purportedly shows Keshav Sthapit supporting his rival candidate Balen Shah. The video starts with visuals of Sthapit calling out the name of his rival candidate Balen Shah, followed immediately by a footage that shows supporters of Shah chanting, “Balen Shah Jindabad [Long Live Balen Shah].” In the third footage Sthapit is heard saying, “Vote for Balen Shah, put your stamp on Stick [Shah’s election symbol].”  Towards the end of the video, we see an image of Keshav Sthapit holding up the election symbol of Balen Shah, the stick. Text superimposed on the video reads, “Chief ambassador of Balen Shah’s election campaign.” CPN-UML mayoral Sthapit’s election symbol is sun.

The video posted on May 10 has garnered 7,785 likes, 133 shares and 119 people have commented on it until the time of publishing this article.

To check the veracity of the claim made in the video, Newschecker closely analysed the footage and found that the first two clips used in the video appeared to be from two separate events, one from Sthapit’s address to a crowd and the other from a rally of Balen Shah. However, we were unable to trace the first two clips.

Further, to find the source of the third footage, we conducted a keyword search on Google using the words ‘Keshav Sthapit’, which led us to a video posted by YouTube channel of Nepal’s popular news website setopati.com on May 3. This video on YouTube was an exact match to the keyframes of the viral video. In the video, the UML mayoral candidate Sthapit is actually lashing out at attempts to circulate posters with his face edited onto an image of Balen Shah holding up his election symbol, the stick.

“They have manipulated Balen’s photo by pasting the image of my head, and are asking my voters to vote for a stick to ensure Keshav Sthapit’s victory. How can they do such things in politics?” he is heard asking in the video. Dubbing the manipulation of image as cheating, he is heard warning Balen and his supporters not to deceive people.

The image described by Sthapit is also seen in the final second of the viral video.

Taking this as a clue, Newschecker conducted a Google search with keywords ‘Balen Shah election symbol’ and found an iconic image of Balen Shah holding up a sheet of paper that features his election symbol, the stick. This image, which was widely circulated in the media, matches with the image seen in the final second in the  viral video–except for the face of Keshav Sthapit. But we found the image used in the viral video has been manipulated as the original one shows Balen Shah displaying his election symbol.

The viral video showing Keshav Sthapit calling on his supporters to vote for his rival candidate Balen Shah and his election symbol stick is manipulated.