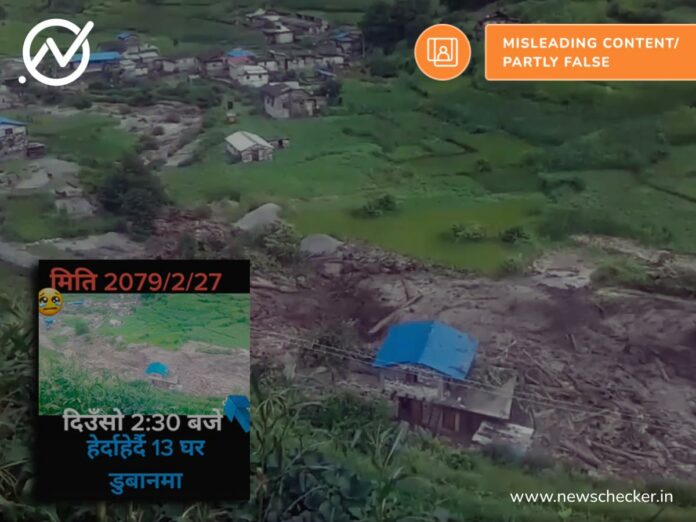 A 22-second video showing flash floods wreaking havoc in a village, sweeping through farm lands and levelling trees, while residents flee away from the raging waters, is going viral on video sharing platform TikTok, claiming to show a recent incident. However, Newschecker has found the video to be old.

The Meteorological Forecasting Division at the Department of Hydrology and Meteorology has said that the annual monsoon has reached Nepal early this year. The weathermen forecast above average rains this year.

Against this backdrop, TikTok user @sapkotaasut0sh posted a video showing flash floods wreaking havoc in a village, sweeping away trees and destroying farm lands. Text superimposed on the video reads, “This [flood] happened at 2:30pm on June 10, 2022.  People were forced to become mute spectators while 13 houses were swept away by the flood.”

Posted on June 11, the video has been liked 2,575 times, shared 37 times and 76 people have commented on it until the last count.

To check the veracity of the claim made in the video, Newschecker conducted a search on various platforms by using keywords such as ‘floods in Nepal’ and ‘landslide in Nepal’ but couldn’t find any matching video. Likewise, there were no news reports of floods and landslides caused by monsoon wreaking havoc in Nepal this year.

On watching the viral video closely, we noticed another ID @premdhami577 on the bottom right corner.  Taking it as a clue, we searched the TikTok ID for a similar video and found a video whose frames matched the viral video.  The video was posted on August 20, 2020. The comments on the post indicated that the video was from Gamgad of Mugu district in Nepal.

Further, we conducted a search on Facebook using Nepali keywords ‘Floods in Gamgad Mugu’ which led us to the original video posted on Facebook by one Parash Mani Malla, a government official at Mugu District Hospital, on September 14, 2019.  The post has been viewed 203k times, liked 1.8k times and 261 people have commented on it.

Viral video of flash floods  washing away crops and trees is from 2019, from Mugu district.

Facebook
Twitter
WhatsApp
Linkedin
Previous articleVideo Showing Tourists Having A Close Encounter With Tiger Is Not From Nepal’s Bardiya
Next articleNo, Actor Paul Shah Has Not Been Released From Jail, Viral Video Is Old