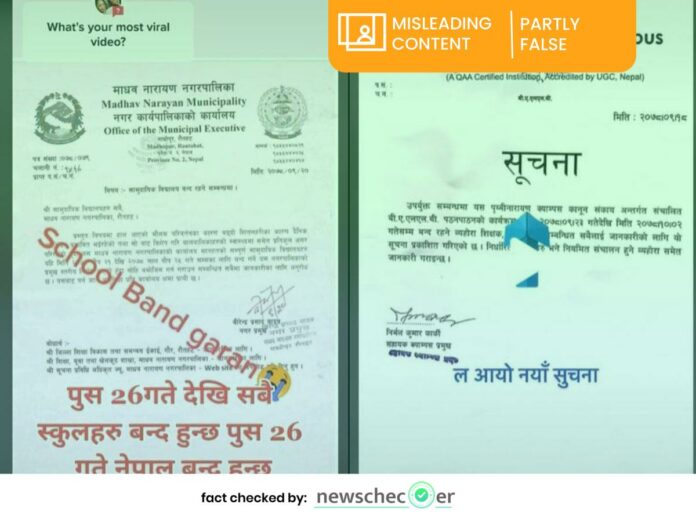 In the wake of surging Coronavirus cases in Nepal, several videos showing shutdown notices issued by different educational institutions are going viral on social media. A fact-check by Newschecker found that the school closure notices shown in the videos were issued for winter vacations, and were hence misleading.

TikTok user ananya9076 was among those who posted a video claiming closure of schools across the country over rising Coronavirus cases. The audio says, “The Ministry of Health and Population made the recommendation (to educational institutions) after the sudden increase in the risks of coronavirus infection.” The clip abruptly stops after saying, “From now online.”

A notice announcing closure of public schools issued by Madhav Narayan Municipality can be seen in the video, and the text superimposed on the video reads, “All schools will be closed from January 10, there will be a shutdown on January 10.”

The post was liked 78k times, shared 6572 times, and 140 people had commented on it until the time of posting this article. This makes it obvious that the post is spreading fast among the social media users.

Similarly, we came across another video, using the same audio clip, posted by susmeesharma (Susmita Sharmau). The video shows a notice issued by the Faculty of Law, Prithvi Narayan Campus, Pokhara with the same audio .  The video was shared 85 times and liked by 1135 users.

After seeing mixed reactions on the social media about the posts claiming the closure of schools, we decided to do a fact check on them.

Newschecker began by looking up the notice issued by Madhav Narayan Municipality, displayed on the first video. We found the notice on the municipality’s website. The notice stated that the community/public schools within the municipality territory will be closed from January 5-9 considering the possible impact on the children’s health due to the cold waves sweeping the region.

Though the public health experts have warned that a new wave of coronavirus could hit Nepal anytime with neighbouring India reporting a spike in cases, Nepal government has not taken any restriction measures to control the spread of the virus.

Newschecker reached out to the Ministry of Health and Population. Dr Sangita Kaushal Mishara, a spokesperson at the ministry said that the ministry has not recommended the government to shut down schools. “If we reach a situation that warrants any kind of restrictions due to COVID-19, the district administrations, and local bodies will take such a decision. The government has its own mechanism for a nationwide restriction,” he said.

The second video shows a notification, issued by the Department of Law at Prithvi Narayan Campus, Pokhara, about halting the classes for a few days starting from January 7 to January 16. The accompanying audio claims that the government has recommended shutting down schools across the country in view of the rising cases of coronavirus infection.

Faculty head at Prithvi Narayan Campus, Nirmal Karki, denied that the closure was announced to curb the spread of coronavirus. “Every year we grant a vacation during winter. This is just a part of that winter holiday,” he told Newschecker.

On further investigation, we found the audio first posted by a TikTok account named Artha Sarokar on April 9 is being used to spread misinformation.

The videos claiming that the schools will be closed from January 10 on the recommendation of the government are misleading.

Ministry of Health and Population