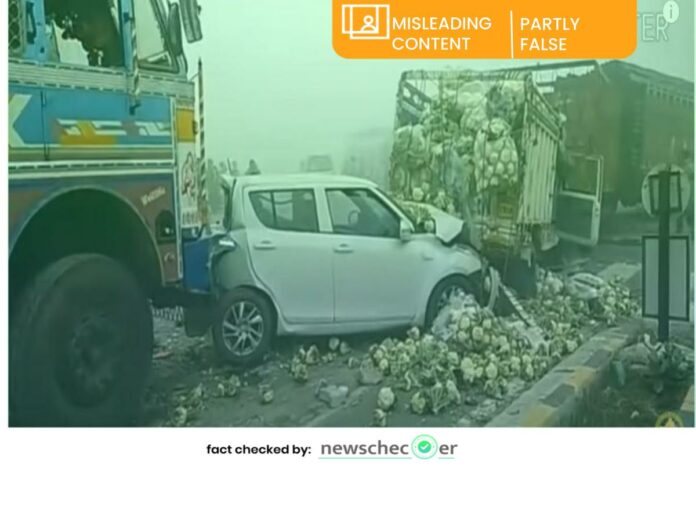 A video claiming to show a pile-up of vehicles apparently due to poor visibility on the Rajbiraj-Janakpur road in Saptari district in Nepal, has gone viral on TikTok. A fact-check by Newschecker found that the video was from November 9, 2017 and took place in Palwal, NH 2 in Delhi.

Among the users who posted the video was TikTok user imgaurav31, whose post on December 30, claims that the accident happened in Nepal’s Terai region. The short video shows a line of vehicles that have crashed into each other, badly damaged. Texts on the video read, “On the way to Janakpur from Rajbiraj at 6.1.”

The video has garnered 2449 likes , and 28 shares until the time of publishing this report.

To check the veracity of the claim made in the video, we began our fact check by relevant keyword search on Google. One of the search results, which carried the same video, claimed that the incident was from ‘Palwal’ near Delhi.

On further investigation, we came across several news reports of a traffic pile-up accident on Yamuna Expressway in India, that took place on November 9, 2017. Several news media including Indian Express, India Today have covered the news. But a video, in particular, posted by YouTube channel ‘Discovery Rajasthan’ was indistinguishable from the viral video.

We found that the vehicle pile-up accident on Yamuna Expressway is not an isolated event, and occurs time and again when visibility dips to a few meters during winter.  The findings make it clear that the footage was from the 2017 accident at Palwal National Highway 2 near Delhi.

Here is the original YouTube video from which the viral video took a clip out of context.

The viral video claiming to show a pile-up of vehicles on Rajbiraj-Janakpur stretch of the East-West Highway is actually an old video from the November 2017 accident in Delhi-Palwal region of National Highway 2.