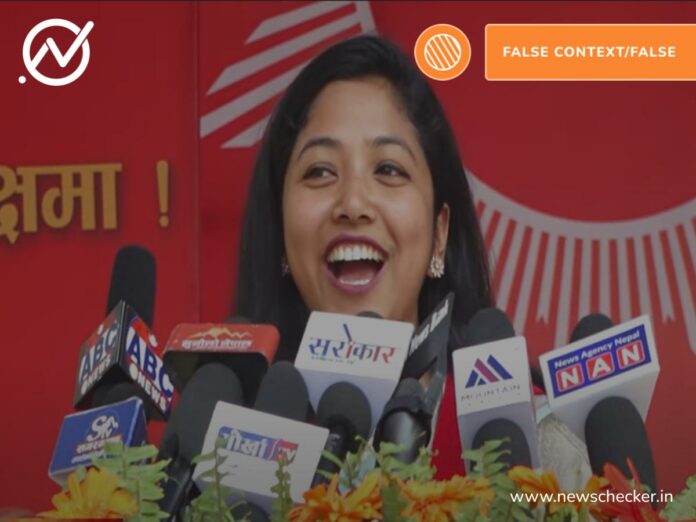 With the counting of votes in the recently held local body polls underway in Nepal, a video purportedly showing Sunita Dangol, the deputy mayor candidate from Communist Party of Nepal-Unified Marxist Leninist (CPN-UML), cheering the lead of independent candidate Balen Shah for the post of Mayor, is going viral on TikTok.

Newschecker found that old footage from Dangol’s election campaigns were manipulated to make the false claim.

Besides being the capital, Kathmandu Metropolitan City (KMC) has drawn a lot of interest in the recently held polls due to enormous popularity of independent candidate Balen Shah, who along with political heavyweights—CPN-UML’s Keshav Sthapit and Nepali Congress’s Shrijana Singh—is running for the post of mayor. Shah, a rapper and structural engineer, has been leading the count until the time of writing this article.

The video posted on May 17 has been spreading fast, garnering 61.5k likes, 820 shares and 642 comments until the last count.

To check the authenticity of the claim made in the video, Newschecker began by analysing the video thoroughly and realised that the video had two separate footages edited together.

We looked for the original source of the first footage using keywords ‘Keshav Sthapit Sunita Dangol’ and found a video posted by Aajako Press whose frames from the 6.34-minute time-stamp exactly match the viral video. The video captures the response of Keshav Sthapit and Sunita Dangol after filing their nominations at the Election Commission on April 25, 2022 to contest the election for the post of mayor and deputy mayor of Kathmandu Metropolitan City.

On checking the video thoroughly, we found Dangol becomes cheerful as she hears Sthapit’s fervour while talking with the media.

To ascertain the source of the second video, we conducted a Google reverse image search on one of the keyframes of the second video and which led us to a video posted by the YouTube channel of Nepal Live online, which carried a footage, with similar frames, from an election campaign program organised on the occasion of May Day.

We further searched YouTube using keywords ‘Sunita Dangol’ ‘May Day’ and found a video posted on the Online Tv YouTube Channel on May 2. The frames of the video from 0.30-minute exactly matched the frame of the second footage used in the viral video.

In the footage matching the viral video, we can hear Dangol addressing a mass gathering and appealing to her party cadres to vote for Sun [CPN-UML’s election symbol] saying,  “Seven suns , seven stamps. But there are eight suns, right?” This video makes it clear that Dangol was addressing the CPN-UML cadres during the gathering organised to mark May Day.