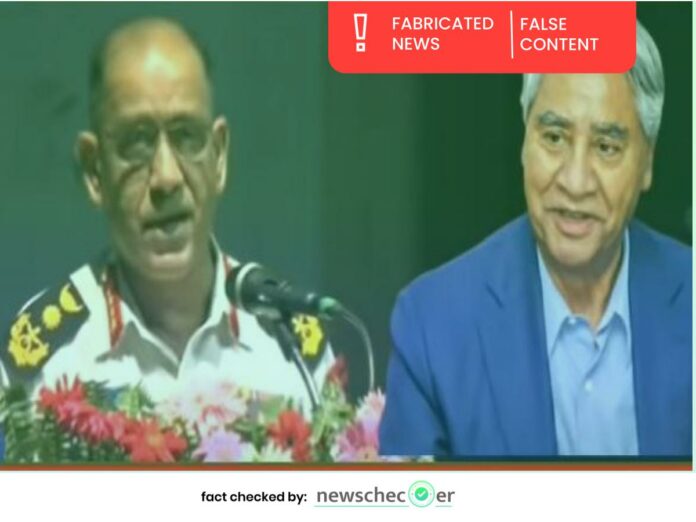 At a time when the issue of parliamentary ratification of US Millennium Challenge Corporation (MCC)’s Nepal compact has left the ruling coalition sharply divided, misinformation and manipulated contents surrounding the issue are being widely shared among Nepali social media users. Two videos allegedly showing Nepal’s Army Chief Prabhu Ram Sharma warning that no leaders would be spared if the MCC is ratified against the spirit of the general public are going viral on TikTok.  Newschecker has found that footages belong to a different event and have been manipulated by overlaying a false voice-over on top.

The Millennium Challenge Corporation, worth approximately NRs 55 billion to build infrastructure projects related to transmission lines and road networks, has become the most hotly debated issue in Nepal with partners of the current ruling alliance arguing for and against the aid.

Supporters of MCC have been saying that it is the biggest grant for a specific project in Nepal, while its detractors are arguing that the aid is part of the US’s Indo-pacific strategy and undermines Nepal’s sovereignty.

Nepal and the US signed the grant assistance in 2017. The agreement registered in the Parliament in 2019 has been stuck ever since, as the political parties are sharply divided over its ratification from the parliament. The US has given a deadline of February 28 for the ratification and also warned of taking the fund elsewhere if Nepal delays its ratification.

In light of these circumstances, TikTok user nepal_samachar posted a video, showing visuals of Nepal Army Chief Prabhu Ram Sharma addressing a programme, while two mugshots of Prime Minister and Nepali Congress President Sher Bahadur Deuba are displayed—one each on the right and left of the video. Text superimposed on the video reads, “Army chief warns that no leader will be spared if the MCC is ratified against the spirit of the people.”

The video posted on February 5 is spreading fast among Nepali social media users, garnering 51.7k likes until the time of publishing this article. It has been shared by 1887 users and 1764 people have commented on it.

Another TikTok user arjun.chhetri5 posted a similar video which shows footage of Chief of Army Staff (CoAS) General Prabhu Ram Sharma addressing a programme of Nepal Army. The audio played with the video is the same as the first video.

To check the authenticity of the claim made in the video, Newschecker looked for the original source of the video by conducting a keyword search for ‘Army Chief General Prabhu Ram Sharma address’.

The search led us to a YouTube video which was indistinguishable from the viral video. The video was posted by a YouTube channel named ‘Nepal Today’ on September 11, 2021, carrying the same footage as in the viral video. The video is from the inaugural speech of Sharma after he assumed the post of Nepal Army Chief. On listening to the entire speech, nowhere in the 5.59-minute video did we find General Sharma uttering any warnings or statements regarding MCC.

Further, Newschecker conspicuously noticed that the voiceover heard in the viral was familiar as we have already done fact-checks on other videos using the same voice. Thus, we conducted keyword searches for ‘MCC’, ‘Army Chief’, ‘Nepal Army’, ‘Myanmar’, ‘warning’ and ‘Greater Nepal TV’. Our search led us to a video bearing close resemblance to the viral video, posted on the YouTube channel of Greater Nepal TV, on February 4, 2022, which is notorious for posting manipulated and unsubstantiated claims presented in a news bulletin style.

Newschecker found a video titled, ‘Nepal Army declares Myanmar’s system will be implemented in Nepal, if MCC is endorsed’ containing the portion of the first viral video with Prime Minister Deuba’s image.

Our fact-check discovered that the viral audio of Greater Nepal has been used by 104 other videos to spread misinformation regarding CoAS General Sharma’s statement about MCC.

The second viral video was also made up by using the original video of CoAS Sharma’s inaugural speech and overlaid with the audio of Greater Nepal TV.

Newschecker investigation found that Nepal Army Chief Prabhu Ram Sharma has neither said anything about MCC nor issued any warnings that he would ‘not spare any leader’. The viral video from CoAS General Sharma’s inaugural address after he assumed the top post of Nepal Army in September 2021 has been manipulated by overlaying a false audio on top.

Facebook
Twitter
WhatsApp
Linkedin
Previous articleViral Video Purporting to Show PM Deuba Arguing with Maoist Chief Dahal About MCC Is Manipulated
Next articleDid The US Announce Pulling Out MCC From Nepal? No, Viral Video Is Manipulated