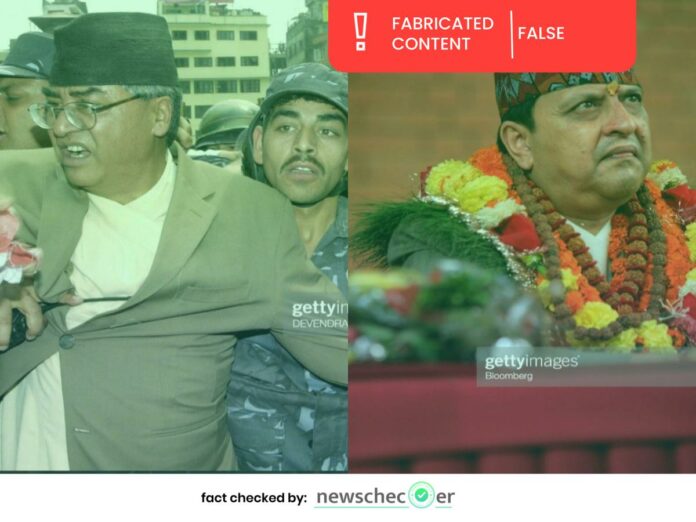 Even though Nepal bade farewell to the centuries-old institution of monarchy back in 2008 and became a new republic, the call for restoration of monarchy has not died down completely. In this context, a video claiming that Nepal’s deposed King Gyanendra Shah flew into rage and ordered immediate revoking of the US Millennium Challenge Corporation aid has gone viral among Nepali TikTok users. The video further claims that the former monarch’s move has terrified Prime Minister Sher Bahadur Deuba and CPN (Maoist Centre) Chairman Pushpa Kamal Dahal. Newschecker found that the video was fabricated by using false voice-over and old images.

Gyanendra Shah has been living as a commoner in Nagarjun palace, a forest retreat on the outskirts of Kathmandu, after the first meeting of the 601-member Constituent Assembly voted to abolish the monarchy. Perhaps disillusioned by the conduct of the mainstream political parties over the past decade, an increasing number of people are seen participating in pro-monarchy rallies organized every now and then on the streets of Nepal.

The video posted on March 3 has garnered 21.6k likes, 179 shares, and 446 people have commented on it until the time of publishing this article.

Further, we conducted a search on google using keywords such as ‘Gyanendra Shah’, ‘MCC’, and ‘Former King on MCC’ to check if there are any statements by Gyanendra Shah regarding the $500 million US grant that courted controversy over its ratification from Nepal’s parliament. But we did not find any reports about the former king’s statement regarding the MCC and orders that terrified Prime Minister Deuba and Maoist Centre Chairman Dahal.