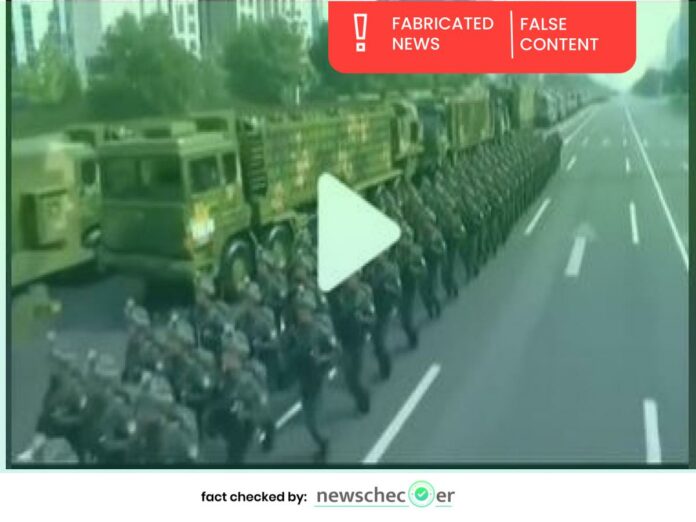 A viral video on TikTok claims that China has extended military aid worth NRs 2 billion to Nepal to purchase two missiles and a fighter plane. Newschecker found that the claim made in the video is fabricated and misleading

TikTok user maheshyadav11110 (Mahesh Yadav) shared a video on January 12, which shows edited footage of a military parade, the Chinese president Xi Jinping and fighter planes. Text superimposed on the video reads, “China has given NRs 2 billion aid to Nepal to purchase weapons. The aid amount could purchase two missiles and a fighter plane.” Audio clip accompanying the video is heard saying, “Nepal Army is going to be even more stronger after China decided to extend NRs 2 billion to purchase weapons.”

The video further claims that the Chinese aid referred to in the viral video is part of the agreement signed between Nepal and China during former Defence Minister Ishwar Pokharel’s visit to China. “The amount could purchase two missiles with 300-km range and one fighter plane,” the audio claims.

The video has garnered 27.6k likes, 280 comments, and 221 people have shared the video until the time of publishing this article.

To check the authenticity of the claims made by the video, Newschecker conducted a  google search to understand the media coverage regarding Chinese military aid to Nepal using relevant keywords such as ‘China military aid to Nepal.’. Our search led us to various news reports on the issue.

A report on defence ties between Nepal and China May 19, 2019 published in The Annapurna Express says that former Defence Minister Ishwor Pokharel signed an agreement with Chinese State Councilor and Defense Minister Wei Fenghe during his visit to China in October 2018.

According to that agreement, China would provide assistance of RMB 150 million (NRs 2.79 billion) to Nepal over five years for the purpose of humanitarian and disaster relief equipment. However, there was no mention of purchasing any military weapons such as missiles and fighter planes.

We checked the press statement issued by Nepal’s Embassy in China on 27 October, 2018 during the then Defence Minister Pokharel’s visit  to China.  “Minister Pokharel underscored the importance of cooperation in military training, hardware in humanitarian and disaster management, and medical equipment and peace-keeping operations, and requested for Chinese support in establishing Defense University in Nepal,” the statement reads. Highlighting the important role of UN peacekeeping operations in keeping the peace, saving lives and promoting human rights, Minister Pokhrel said that Nepal attaches great importance to peacekeeping operations for promoting world peace and security, the statement further reads. .

It is clear from the statement that no other issues except for bilateral cooperation in military training, disaster management, provision of medical assistance and equipment, and peacekeeping figured in the meeting.

In November 2020, the Chinese State Councillor and Defence Minister Wei Fenghe landed in Kathmandu for a daylong stopover and held several meetings before flying to Pakistan the same evening. The Chinese Defence Minister agreed to resume Chinese supplies of various non-lethal military aid to Nepal that had been halted due to the Covid-19 pandemic, Kathmandu Post reported, attributing officials familiar with the meetings. Since then there have not been any other engagements or high-level meetings regarding military aid to Nepal between the two countries. Our findings make it clear that China has never given aid to Nepal for purchasing military weapons to Nepal.