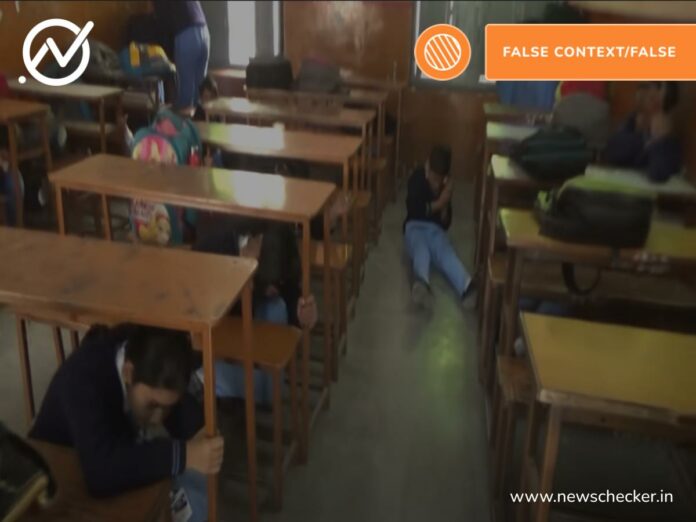 Two videos purportedly depicting the moments when earthquakes struck Nepal and neighbouring Darjeeling district of India have been going viral on TikTok. Users sharing the videos claimed that the incident is recent. Newschecker found the claims to be false.

Nepal is vulnerable to earthquakes as it lies in one of the most seismically active regions of the earth. The last time Nepal experienced a massive earthquake was in 2015 when a 7.6 magnitude earthquake struck Nepal, killing around 9000 people.

Against this backdrop, TikTok user @khesharilalyadav15 posted a video, showing the ground shaking and people and vehicles wobbling. People are heard screaming and running, while text superimposed on the video reads, “Earthquake in Nepal, 2079/03/28 [July 12, 2022].”

The video posted on July 12 has garnered 499 likes and nine users have shared it.

Another user @kingarjun82 posted a video, which shows visuals of some school children running, with their heads covered with their school bags, while others take cover underneath benches in the classrooms. Some school children are also seen sitting on the floor as if they are injured. Text superimposed on the video reads, “An earthquake measuring 7.6 on the Richter Scale struck with its epicentre in Darjeeling”, while children can be heard crying in the background. The video caption reads, “Tremors were felt in Nepal’s eastern belt.”

The video has garnered 211k likes, 4,073 people have shared and 1,484 people have commented on the post until the time of publishing this article.

We found that both the videos have used the same audio and it has been used to create more than 50 other videos.

To check the authenticity of the claims made in the viral video, Newschecker analysed the website of National Earthquake Monitoring and Research Centre in Kathmandu and found that no major earthquake has struck Nepal recently.

Further, we conducted a search on YouTube using the keyword ‘Nepal Earthquake’ and found a video whose frames matched the viral video.  The video posted on YouTube channel WildFilmsIndia on August 30, 2018 actually shows CCTV footage of the moment when a 7.6 magnitude earthquake struck Gorkha district of Nepal on April 25, 2015.

It is clear that footage of the 2015 earthquake was falsely shared as a recent quake in Kathmandu.

On analysing the video closely, we found that the children and the teachers were not really panicked and that the visuals were from a mock drill on disaster preparedness. Further, we conducted a search on YouTube using keywords ‘earthquake drill’ and found a video whose frame from timestamp 0.32-minute exactly matched the viral video. The video posted on YouTube channel Tube Crawler shows a mock drill on earthquakes conducted by the government of India.

Our findings made it clear that the footage depicts an earthquake drill at a school in India, and not the moment when a 7.6 magnitude earthquake struck Nepal.

The videos purporting to show the moments when earthquakes struck Nepal and Darjeeling of India recently are actually old. While one of the videos shows footage of the 2015 earthquake in Nepal, the other video shows a mock drill on earthquakes in India.