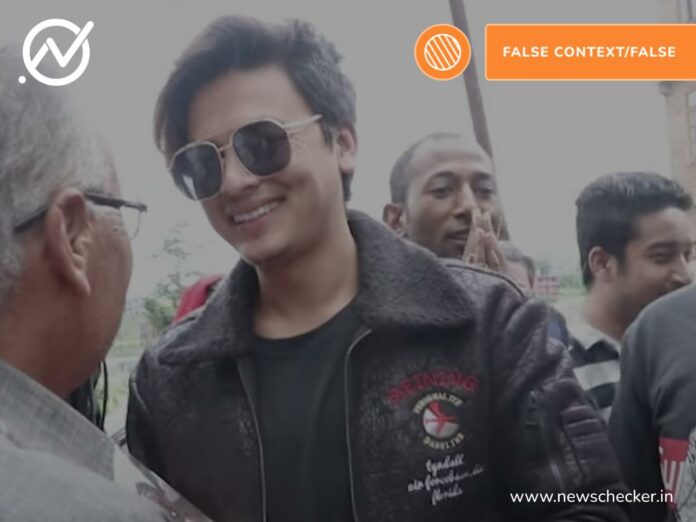 Ever since the arrest of Nepali cine artist Purna Bikram Shah alias Paul Shah in February earlier this year over allegations of rape, many untested claims have surfaced online. In this connection, a video claiming to show Shah released from custody after winning the legal battle is going viral on TikTok. Newschecker found that the viral video is old and unrelated.

Shah is currently being held in judicial custody after a 17-year-old singer accused him of raping her on a false promise of marrying her. Shah and the singer had worked together in several music videos. On March 24, Tanahun District Court ordered Shah to remain in custody until the final verdict.

According to Nepal’s Act Relating to Children 2018, those below the age of 18 are deemed as minors, and the complaint against Shah is related to rape and abuse of minors.

Giving a new twist to the rape case, the singer changed her statement at Tanahun District Court in April. In her court statement, the minor singer said that she was not raped by the actor and she filed the complaint after being provoked by others.

In this context, TikTok user @updatenepal0 posted a video, showing visuals of artist Shah getting out of his car and waving at cheering fans. The 31-second video also shows Shah being welcomed with bouquets and Khada. Text superimposed on the video reads, “Finally, the truth has prevailed. Paul Shah has been released from custody, and fans gather to welcome him.”

The video posted on June 20 has been spreading fast garnering 19.9k likes, 130 shares and 523 people commenting on it until the last count.

Also Read: No, Artist Paul Shah Has Not Been Released From Custody, Old Videos Shared With False Context

To check the veracity of the claim made in the viral video, Newschecker took several keyframes from the video and conducted a reverse image search on google but found no relevant result.

On analysing the video closely, we noticed a logo of ‘Canada Nepal YouTube Channel’ on the top right corner. Taking it as a clue, we conducted a search on YouTube using keywords ‘Canada Nepal Paul Shah’ which threw up several results.

One of the videos, uploaded on July 8, 2019, had a similar frame to that of the viral video.

The video shows the footage of Shah being welcomed at Modern college in Bhaktapur.

On analysing the video further, we found that the YouTube video matched the viral video from the timestamp of 1 minute two seconds onwards.

What is the current status of the case against Shah?

In May, Shah had appealed at Pokhara High Court challenging the decision of lower courts—where the cases against him were lodged. But the High Court on June 2 upheld the decisions of Tanahun district court and Nawalpur district court to send actor Shah to judicial custody on a rape charge against a minor.

Newschecker reached out to Tanahun District Court registrar Min Bahadur Kunwar to enquire about the current status of Paul Shah. He confirmed that Shah has been kept at Tanahun District Prison in Damauli.

Our findings make it clear that actor Shah has not been released from prison and the court proceedings against the rape charges against him has not concluded.

The viral video showing cine artist Paul Shah being welcomed is old, and the actor has not been released from prison as is being claimed.