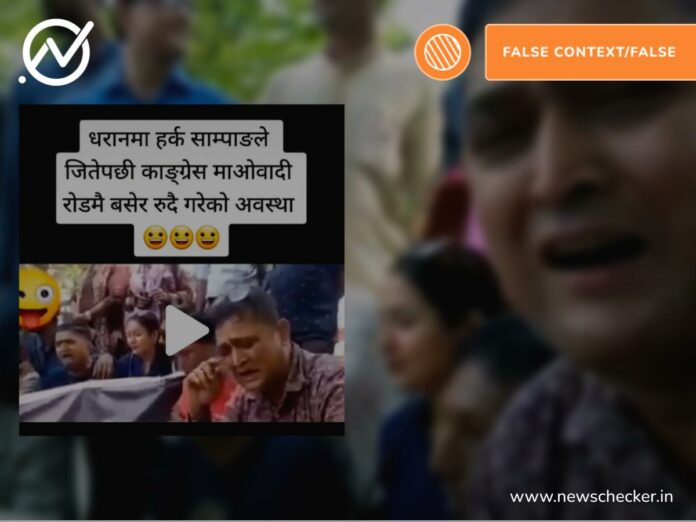 The counting of votes for the local body polls held on May 13 is almost complete and has already thrown up some interesting results. Independent candidates have emerged victorious, defeating the candidates of major political parties in Kathmandu, Dhangadhi and Dharan.

Dharan Sub-metropolis is one such exception, where independent candidate Harka Raj Rai (Sampang) emerged victorious in the mayoral race defeating the ruling alliance. In this context, a video on social media claims that cadres of the ruling alliance, –  the Nepali Congress, and the Communist Party of Nepal (Maoist Centre) have been “crying on the streets” after Sampang’s win. Newschecker’s investigation has found this to be incorrect.

TikTok user @dipendra893 shared a viral video showing a group of people sitting on the street and crying. Text superimposed on the video reads, “Cadres of Nepali Congress and Communist Party of Nepal (Maoist Centre) crying on the streets after Harka Sampang won the election in Dharan.”

Posted just yesterday, the video has garnered 2,257 likes already and has been shared by 131people while 169 users had commented on it at the last count.

To verify the authenticity of the claim made in the viral video, we started by checking the official election result of the Dharan sub-metropolis and found that Harka Raj Rai has won the election securing 20821 votes. His closest rival candidate of the Nepali Congress party has secured 16,059 votes.

We then searched for media reports on any protests held by either of the political parties over the loss of the Dharan mayor’s seat but to no avail.

Taking a closer look at the video, we noticed a black banner close to the people crying in the viral video. Using this as a clue, we searched YouTube for older videos using the keyword ‘crying protest’, which led us to the official YouTube channel of eKantipur.com- Nepali news portal  Kantipur Daily’s official website. The frames and sound of the ekantipur video closely matched the viral video we are investigating.

The video posted on May 19, 2019 documented a protest orgnaised by journalists of Morang district against the draft Media Council Bill outside the district administration office.  The draft bill proposing tough regulations on journalists including fines up to Rs 10 million and jail terms up to 15 years or both was widely protested then.   However, the bill was endorsed by the National Assembly in January 2020 by removing controversial provisions of punishments, and is awaiting endorsement from the House of Representatives.

On examining the video closely, we noticed journalist Lila Ballav Ghimire in the video and reached out to him. He confirmed that the Morang chapter of Nepal Press Union, an umbrella body of Nepali journalists, had organised the protest against the Media Council Bill in May 2019.

The viral video which shows some people sitting on the road and crying is falsely being linked to the recent local body elections in Dharan. Originally recorded in 2019 at a protest outside the district administration office in Morang, the video shows journalists protesting over a draft bill in 2019 and is being falsely shared claiming that it is a recent video. The viral video has no connection to the recently concluded local body elections in Nepal. The people shown in the video are journalists and not cadre of Nepali Congress, and the Communist Party of Nepal (Maoist Centre)