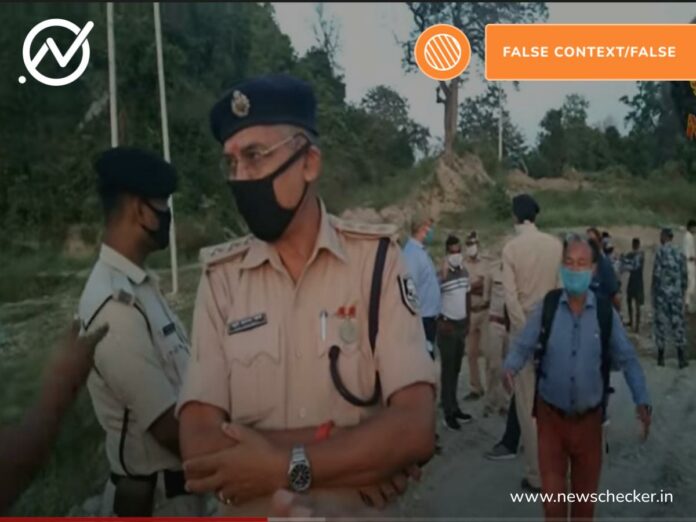 A distorted video purporting to show clashes between security forces along India-Nepal border is going viral on TikTok. The video claims that the clashes left three security forces personnel injured.

A TikTok user @reshurajeshbist5 posted a video, posted a video with two parts, the first part of the video shows Nepali people arguing with Indian security forces personnel and another part shows Nepal’s riot police chasing the demonstrators. Text superimposed on the video reads, “Intense dispute at Nepal-India border, three security personnel injured. Please express your reservations here. The disputes have been increasing at every border point.” The caption further reads, “The government should do something to resolve the dispute at no man’s land. Only the people and the army personnel are injured every day.”

The video posted on July 19 has garnered 3059 likes, 78 shares and 60 users have commented on it until the last count.

During the fact check, Newschecker found that the viral video is distorted and is a mix of two old different videos and is being shared with the wrong context.

To check the authenticity of the video, Newchecker analysed the video closely and found two different footages mixed up. So, we split the video into different key frames and conducted a reverse search on google but no results matched the viral video.

We further conducted a search on YouTube using keyword ‘Nepal-India border dispute’ and found a video posted on Thori Online TV. A frame matched the first part of the viral video. Thori Online TV posted the video in May 2020 of a clash between Nepali locals and Indian security personnel over the opening of a newly built Bridge over Thute River in Thori area of Parsa district. But there are claims of the injuries in the clash.

For the second part of the viral video we further conducted a search on YouTube using keyword ‘Nepal Police clash’ and found many videos closely resembling the viral footage. One of the videos was a clash between Nepal Police and locals of Khokana in Lalitpur that matched the viral video.

On searching for the same video on YouTube, we found a video exactly matching the viral footage. The video was published on the YouTube channel of popular online news portal Setopati in July 2020. The clash had ensued after the locals of Khokana protested against the government decision to build Kathmandu-Terai Fast Track Road. The second part is a video grab from the same protest.

The Newschecker in its investigation found that the video is distorted and misleading. No such clash has occurred at Nepal-India border in recent times. The viral video is a mix of two different old clashes. The first part is May 2020 argument at Nepal-India border in Thori, Parsa and the second footage shows clash between Nepal’s security personnel and locals of Khokana over the construction of Kathmandu-Terai Fast Track Road.