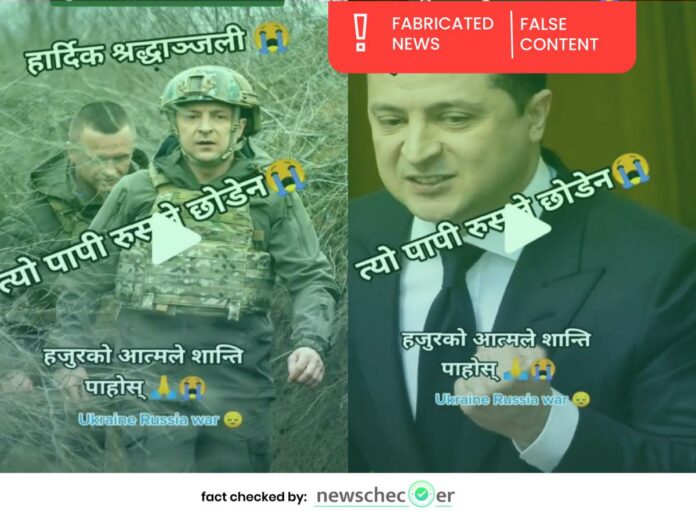 Amid the ongoing conflict between Russia and Ukraine, a video claiming that Ukraine’s President Zelensky has died after being hit by a bullet fired by a Russian soldier has gone viral on TikTok. Newschecker found that the video is false and fabricated.

The ongoing conflict between Russia and Ukraine has dragged on into the fourth week with no signs of abating despite diplomatic efforts to hold a meaningful dialogue. Ukraine’s President Volodymyr Zelensky has been reiterating his desire for direct talks with his Russian counterpart Vladimir Putin to end the war.

Against this backdrop, TikTok user @saroj_neupane7 posted a video, which shows images of Ukraine’s president donning combat fatigue. Text superimposed on the video reads, “Ukraine’s President is no more. Heartfelt Condolence. That cruel Russia didn’t spare you, may your soul rest in peace. Russia Ukraine war.” The video caption reads, “Ukraine’s President has been killed after being hit by a bullet fired by a Russian soldier when he tried to save a child.”

The video posted on March 21 is spreading fast garnering 9326 likes, 128 shares and 943 people commenting on the post until the last count.

Our findings made it clear that the photo was not from recent visits after Russia launched its offensive on February 24.

Further, we searched for the reports about the status of embattled Ukraine’s president Zelensky. We found a latest report by france24.com that said Zelensky has announced he was ready to meet Putin for direct peace talks and that the disputed territories of Crimea and two self-declared republics in Donbas could be up for debate and a possible referendum.

We also checked President Zelensky’s Twitter handle, where he has been regularly posting the latest developments regarding the ongoing conflict and his communications and meetings with foreign leaders. In his latest Twitter post updated 13 hours ago, Zelensaky said he “held talks with Netherland’s Prime Minister Mark Rutte and informed about the struggle against the aggressor, war crimes, shelling of civilian infrastructure.”

The viral video claiming that Ukraine’s President Zelensky has passed away is fabricated, and thus is false.