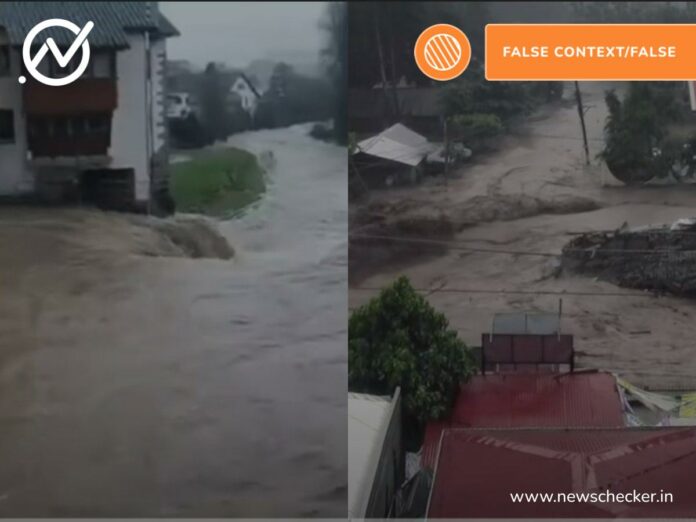 As Nepal experiences respite after days of heavy rains, several unverified videos and images claiming to show the havoc caused by the monsoon are making rounds online. In this context, two videos purportedly showing the devastation caused by recent flooding are going viral on TikTok. Newschecker found that old and unrelated videos from foreign countries were shared with false claims.

TikTik user @pinkydas216 posted a video, showing a swollen river flowing past a settlement, inundating the nearby houses. Text superimposed on the video reads, “36 gates [sluice gates] have been opened at Koshi River Dam. See the plight of Palpa, 2079/0/14 Bikram Sambat.”

The video posted on June 30 has garnered 29.8k likes, and 233 users have shared and 107 people have commented on it until the time of publishing this article.

Another TikTok user @rasmeka.karki01 posted a video, which shows a flash flood engulfing a house. Text superimposed on the video reads, “The water level has been rising in Koshi River and 22 sluice gates have been opened. India’s Bihar state has completely submerged.”

To check the authenticity of the first viral video, Newschecker split it into keyframes and conducted a reverse image search on them, which threw up several images matching the frames of the video. On checking a photo published on gettyimages we found that the frame showed the village of Saint-Jean-Pied-de-Portby in South West France.

Taking it as a clue, we conducted a search on YouTube using a keyword ‘south western France Flooding’ that led us to a video, whose frame at 0.37-minute time-stamp exactly matched the viral video. The video uploaded on December 11, 2021 by the YouTube Channel ‘Evolution Crisis’ shows a video report about the flash floods in southwestern France after heavy rains, thus proving that the viral video doesn’t show the flood in Palpa district of Nepal.

To check the veracity of the claim made in the second viral video, Newschecker conducted a reverse search on keyframes from the video.

One of the results led us to the YouTube channel of Mark Anthony Besario, which carried the same footage that exactly matched the viral video. We learnt that the video shows the footage of a flash flood caused by Typhoon Sendong in Dumaguete city of the Philippines in December 2011.

Tropical Storm Washi, known locally as Sendong, had swept through the Mindanao region of the Philippines in Dec 2011, bringing strong winds and heavy rains that caused massive flooding and landslides.

We further analysed reports on floods in the Indian state of Bihar due to a flooded Koshi and found no such reports.

The videos claiming to show the flooding in Palpa of Nepal and Bihar state of India are older videos from other incidents that have been shared in false context.