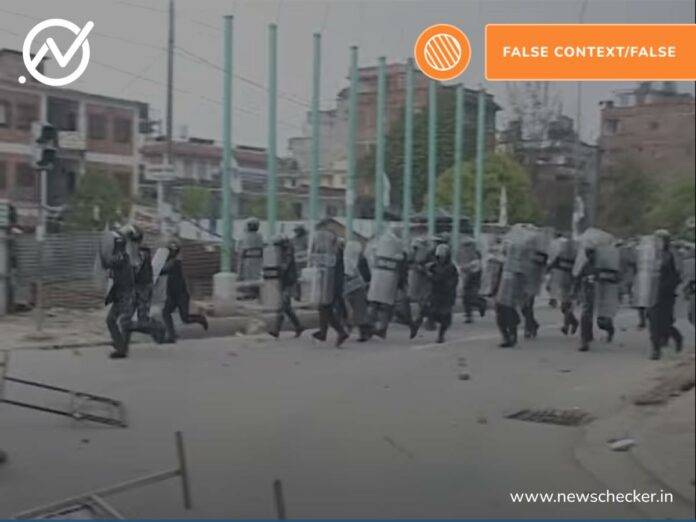 As Nepal is heading for the local elections slated for May 13, popular social media platforms are replete with posts relating to the upcoming elections, election candidates and their agenda. In this context, a video allegedly showing a clash between security personnel and protestors over an alleged murder of an ‘independent candidate contesting for the post of Mayor’ by an unidentified group, is going viral on TikTok. Newschecker investigation found that the video was old and has nothing to do with the impending elections.

A TikTok user @pujan_neupane posted a video, showing visuals of security personnel in riot gear armed with batons and shields chasing demonstrators. Text superimposed on the video reads, “Clash between police and people after the murder of an independent mayoral candidate by an unidentified group.” However, the video doesn’t specify the name or any other details of the candidate or the constituency he was contesting from.

The viral video posted on April 27 has garnered 8,766 likes, 39 shares and 79 users have commented on the post until last count.

Another video posted by the same user shows similar visuals of riot police personnel ducking in an attempt to dodge the stones pelted by protestors. The text on the video reads, “Second part, after the murder of mayor.” The video has been liked by 1,346 users and 15 people have commented on it.

To check the authenticity of the video, Newschecker took several keyframes from the viral video and conducted a reverse image search on Google. But the results did not bring up any relevant results.  There were no reports in Nepali media about the murder of a mayoral candidate contesting for the upcoming local polls.

On analysing the video closely, we found several clues that indicated that the visuals were from the exhibition road near Padmodaya school in Kathmandu. On conducting a keyword search on YouTube with the key words ‘Students and Police Clash Exhibition Road’, we found a video matching the viral video posted by one channel named ‘sacho sacho channel’ on March 28, 2017.

On conducting a google search for ‘students of RR Campus clash March 2017’, Newschecker found several news articles regarding the clashes at RR College. On checking the news report published in kathmandu.com, among other online portals, we learnt that the clash occurred during the Free Student Union election at the college after the student unions affiliated to various political parties including the CPN (Maoist Centre), Naya Shakti Nepal, and Sanghiya Samajwadi Forum Nepal protested against the election. Three journalists who were on the scene to cover the election were injured when the agitating students hurled Molotov cocktail.

The video claiming to show visuals of clash after the murder of a mayoral candidate is actually from the March 2017 clash at RR College in Kathmandu and shared in the context of the upcoming local level elections.