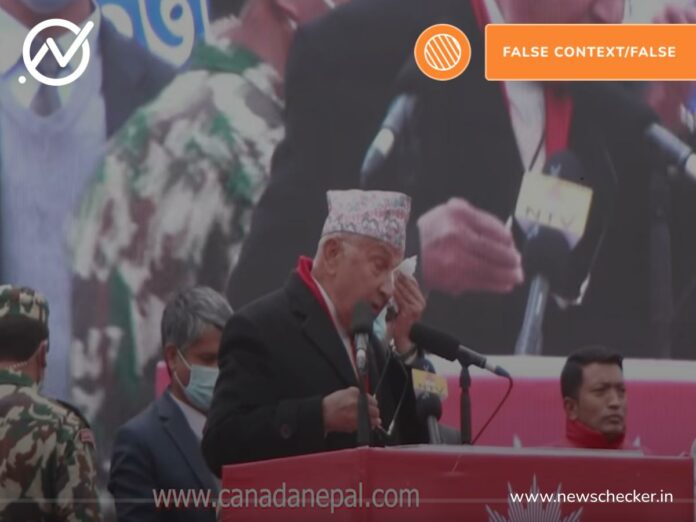 At a time when the country is headed for the local body elections slated for May 13, many old and false contents are being passed off online in the context of the upcoming polls. A video allegedly showing former Prime Minister and chairman of main opposition party CPN-UML KP Sharma Oli allegedly wiping his tears after the ratification of Millennium Challenge Corporation (MCC), US grant project is being widely shared on social media. Newschecker found that the video is from February 2021 and is not linked to the MCC.

After weeks of wrangling among Nepali politicians, fierce debates and widespread protests, Nepal’s parliament finally ratified the NRs 60 billion American grant agreement on February 27. The MCC, a US government aid agency signed an agreement in September 2017 with the Nepal government, extending the grant for building an electricity transmission line and upgrading road networks in the Himalayan nation.

Against this backdrop, TikTok user @sagarlmc1 posted a video in which CPN-UML Chairman KP Sharma Oli is seen standing before a podium and addressing a mass gathering. The video shows Oli taking off his spectacles and wiping tears. Text superimposed on the video reads, “Tears have welled up in the eyes of KP Sharma Oli after Nepali Congress leaders Sher Bahadur Deuba and Gagan Thapa, among other cadres, ratified the US aid Millennium Challenge Corporation. Everyone needs to recognise the leader who is so staunchly devoted to the country [Referring to Oli].” The video claims that the UML leader became emotional over the ratification of the MCC Nepal compact and shed tears.

The video posted on April 27 has been spreading fast garnering 17.9k likes and 149 shares, with 641 people commenting on it until the last count.

To check the veracity of the claim made in the video, Newschecker conducted a search on YouTube by using keywords such as ‘KP Oli becomes emotional’, and ‘KP Oli crying’ and found a video on the YouTube Channel of ‘Canada Nepal‘ with Nepali title, “KP Oli cries in the midst of his speech, and Oli becomes emotional seeing the support of hundreds of thousands of people, waving hands about Hindu state.”

On analysing the video closely, we see that the frames match the viral video from a 0.40-minute timestamp. The video was posted on YouTube on February 5, 2021.

Taking the date as a clue we searched for the event addressed by KP Sharma Oli using keywords ‘KP Oli February 5, 2021’ on Google and found that the event was the mass gathering of the supporters of KP Sharma Oli outside Narayanhiti Palace in Kathmandu. We found another video of the mass gathering of KP Oli posted in the Himalayan Times. On watching the video thoroughly, we hear the then Prime Minister Oli speaking informally with his bodyguard at 2.6.24 minute timestamp, “Eyes become teary because of the cold.” Right after that he removes his glass and wipes his tears.

Our findings make it clear that the video doesn’t show CPN-UML leader KP Sharma Oli becoming emotional over the ratification of the US aid under MCC. The video is from the February 5, 2021 mass gathering of Oli after his move to dissolve the parliament and announce election, which was widely protested by his opponents within his own party.

The video showing KP Sharma Oli wiping his tears is actually from his address to his supporters at a 2021 rally and is falsely connected with US aid under MCC.