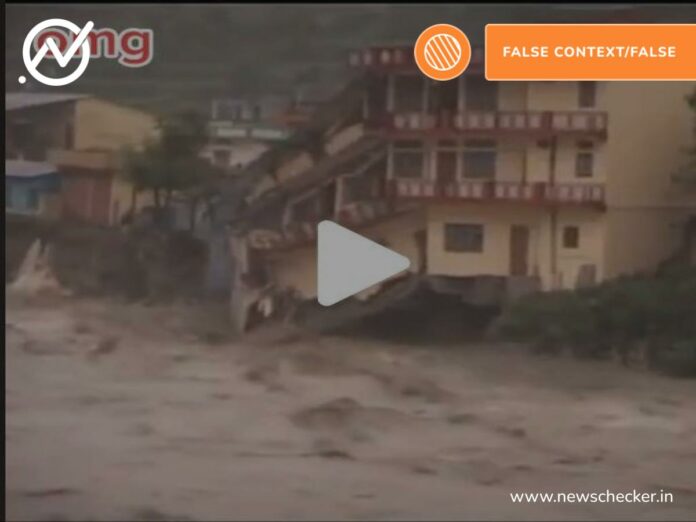 With the annual monsoon reaching its peak in Nepal, reports of rain-induced disasters such as flash floods, landslides and highway blockages are coming in from different parts of the country. In this context, two videos claiming to show recent floods in Nepal are going viral on TikTok. Newschecker found the videos to be old.

TikTok users @kuberneupane25 posted a video, showing visuals of a building being swept away by a flooded river. Text superimposed on the video reads, “Oh God how many lives will you ruin and how many people you torture? Why do you bring misery to happy families?” In the audio, a woman is heard wailing, “The missing child has been found, such a small baby was swept away, a child was swept away in Surkhet.”

The video posted on July 22 has garnered 19.4k likes, 176 shares, and 256 users have commented on it until the time of publishing this article.

Another user @dilliramtiwari3 posted a video, which shows a flash flood sweeping away farm lands and trees. Text superimposed on the video reads, “This is what happened here due to floods.” The audio accompanying the video says, “Fifteen houses have been swept away after a flood swept through a village in Gamgad of Mugu district due the incessant rains since Sunday night. See the sad plight of Mugu.” A song about floods follows.

The video posted on August 2 has been liked by 4,096 users, shared by 46 users and 54 people have commented on it.

To check the authenticity of the claim made in the first viral video, Newschecker split it into several keyframes and conducted a reverse image search on google, which threw up several results. One of the videos, posted on theguardian.com bore close resemblance to the viral video depicting a three-storey building being swept away by a flooded river. The video caption revealed that the footage showed the collapse of a three-story building into the overflowing Ganga River in Uttarkashi, a town in Uttarakhand India in June 2013.

Further, we found another video report on 2013 floods in Uttarakhand, India, posted by India TV on their YouTube channel in June 2013.  The video’s frames from the 0.53-minute timestamp exactly matched the viral video. Thus, our findings make it clear that the video shows the 2013 floods in Uttarakhand, India, and not the recent floods in Surkhet district of Nepal, which swept a child away as claimed in the viral video.

To check the veracity of the claim made in the second viral video, Newschecker analysed the video closely and found that it was debunked earlier by us. Our earlier investigation revealed that the video, first posted on Facebook by Paras Mani Malla on September 14, 2019, actually shows flash floods washing away crops and trees in Gamgad of Mugu district.

The videos claiming to show recent floods in Surkhet and Mugu are false as the first video shows the 2013 flood in Uttarakhand, India and the second video showing floods in Mugu is from 2019.