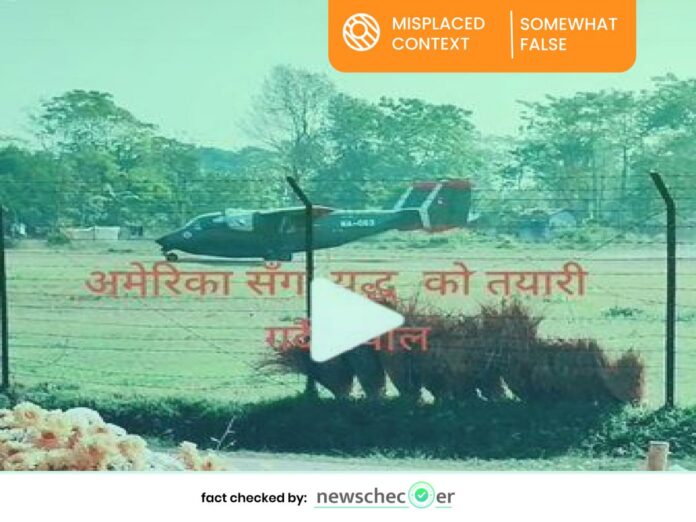 As the US government’s grant to Nepal under the Millennium Challenge Corporation (MCC) has brought geopolitical interests of global powers to the fore, with Chinese and the US officials issuing statements against each other, social media users in Nepal are falling for the misinformation and false narratives surrounding MCC. Recently, one such video claiming that Nepal is preparing to wage a war against the United States of America is going viral on TikTok. Newschecker found that the raw footage captured during a parachute jump training of Nepal Army personnel in Meghauli airport of Chitwan is being shared with false context.

Nepal is at a critical juncture after the ratification of MCC from the parliament has sharply divided the ruling and opposition parties. The ruling coalition led by Nepali Congress President Sher Bahadur Deuba is on the brink of split over differences with its key partners CPN (Maoist Centre) and CPN (Unified Socialist) over ratifying the US grant.

US Assistant Secretary of State for the Bureau of South and Central Asian Affairs, Donald Lu, on February 10 had made separate phone calls to Prime Minister Sher Bahadur Deuba, CPN-UML chair KP Sharma Oli and Maoist Centre chair Pushpa Kamal Dahal  and warned that Washington would review its relations with Nepal if it failed to ratify the MCC compact by February 28.

The agreement registered in the Parliament in 2019 has been stuck due to lack of consensus among political parties. But the MCC Nepal Compact was tabled for parliamentary deliberations on February 20. The US has given a deadline of February 28 for the ratification of the MCC Nepal Compact—a grant worth NRs 55 billion for building electricity transmission lines and road networks.

In this context, TikTok user nikotin258 posted a video which shows visuals of a Nepal Army plane preparing to take off from a runway and another portion of the footage shows paratroopers jumping from the plane. Text on the video reads, “Nepal preparing to wage a war against United States of America.” A folk song accompanying the video praises the valiance of Gorkha soldiers during the legendary Nalapani battle against East India Company during 1814-1816 Anglo-Nepalese war.

The video posted on January 15 has garnered 26.6k likes, 110 shares, while 543 users had commented on the video at the time of publishing this article.

To check the veracity of the claim made in the video, Newschecker conducted a google keyword search for ‘Nepal Army plane’, ‘grass runway’ and ‘para jump’ and found a video similar to the one that is going viral. The video posted on YouTube Channel of Nepal Serofero showed Nepal Army personnel taking part in regular para jump training at Meghauli airport. However, the video didn’t contain anything related to war training.

Further, we looked for reports regarding preparation of war by the Nepal Army against the US. But we did not find anything related to the alleged war between Nepal and the US.

The US and Nepal have had a strong friendship since the establishment of bilateral relations between them in 1947. The February 10 warning by a US official over the ratification of the MCC grant was the most strongly worded communication ever between the countries.

A senior foreign ministry official, seeking anonymity, said that the US is Nepal’s friendly nation and the claim made in the viral video is too far-fetched.

As the original video could not be traced, we reached out to the Manager of Bharatpur Airport, Parvez Alam Siddiqui, who also oversees the Meghauli airport in Chitwan, who informed us that the procedure was regular in the airport. “Nepal Army paratroopers have been conducting para jump training at the airport as part of their regular training,” he told Newschecker over phone.

Video showing the regular parajump training of Nepal Army in Meghauli, Chitwan is shared with false context, claiming that Nepal Army is preparing to wage a war against US, and thus is misleading.