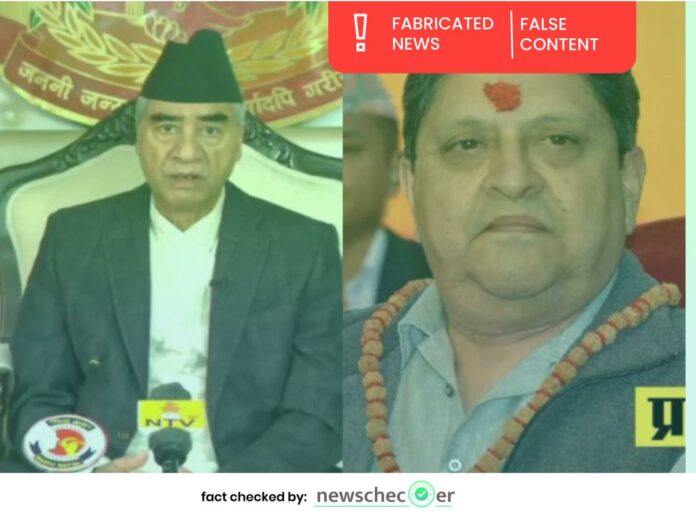 At a time when the issue of US grant under Millennium Challenge Corporation (MCC) has snowballed into one of the most hotly debated topics in the national media, many social media users in Nepal have been jumping into the bandwagon of weaving misinformation and false narratives. One such video claims that the former King Gyanendra Shah warned Nepal Prime Minister Sher Bahadur Deuba from endorsing the MCC regardless of the aid money. The video is being widely shared on TikTok. Newschecker has found that the video has been manipulated by editing the voice-over.

In September 2017, Nepal signed an agreement with the United States of America (USA)’s Millennium Challenge Corporation (MCC) for developing electricity transmission lines and road networks. The agreement was registered in the Parliament in 2019 for its ratification. But the argument over whether Nepal should ratify the MCC and accept the grant has divided the entire spectrum of Nepali society among those supporting and opposing the US aid.

Supporters of the MCC call for an endorsement of the aid without any delay while detractors feel that the aid is part of the US’s Indo-pacific strategy and could undermine Nepal’s sovereignty.

It is in this context that TikTok user sundarpanday posted a video showing images of Prime Minister Sher Bahadur Deuba and Nepal’s deposed King Gyanendra Shah. Text superimposed on the video reads, “After all King is king, long live king, no MCC.”

The audio, presented like a news bulletin, says, “Former King Gyanendra Shah today issued a stern warning to Prime Minister Sher Bahdur Deuba, saying that the MCC should not be endorsed even if the grant money is in trillions.”

The video posted on February 14 has garnered 8,598 likes, 182 shares, and 300 people have commented until the time of publishing this article.

The claim surfaced online in the wake of a warning by an US official that it would be forced to review its ties with Nepal if the Nepali political leadership fails to honour their commitments signed nearly five years ago. The US gave a deadline of February 28 for the ratification of the MCC Nepal Compact.

Deposed King Gyanendra Shah had abdicated the throne in June 2008, honouring the parliament’s decision to declare Nepal a federal democratic republic following a decade-long armed conflict that ended after the signing of peace deal in November 2006.

To check the authenticity of the claim made in the video, Newschecker conducted a keyword search on google for ‘Gyanendra Shah MCC’, ‘former king Gyanendra Shah on MCC’. But we could not find any videos or news reports about the former King making any such statements about the US aid.

On conducting a google reverse image search of the image used in the video, we were led to a news report published by prasashan.com on January 20, 2021. The news report carried a high resolution photo of former king Gyanendra Shah in which he indirectly expressed his concerns over the instability facing the country after it became a republic. The image was indistinguishable from the one used in the viral video.

On another reverse image search of the keyframe depicting Prime Minister Sher Bahadur Deuba, Newschecker found a news report published on January 21, 2022, on barhakhari.com which carried the same photo. The news report was of PM Deuba’s address to the nation after completing six-month in office.

Viral video claiming that former King Gyanendra Shah warned Prime Minister Deuba not to endorse MCC is false. Old and unrelated images of Shah and PM Deuba were used to make up the video with a fake voice over.

Facebook
Twitter
WhatsApp
Linkedin
Previous articleDid The US Announce Pulling Out MCC From Nepal? No, Viral Video Is Manipulated
Next articleVisuals Of Paratroopers Training At Meghauli Falsely Shared To Claim Nepal Army Preparing For War Against US