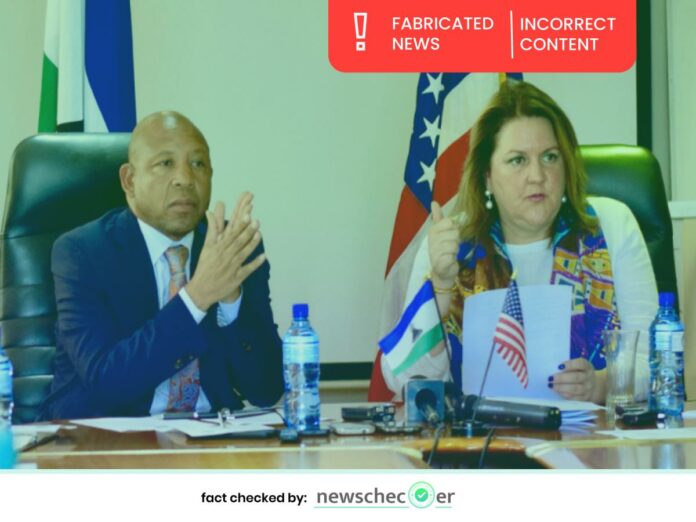 Even as the dilemma over parliamentary ratification of the US grant under Millennium Challenge Corporation (MCC) to Nepal continues, misinformation, click-baits and fabricated contents surrounding the issue are being widely shared by Nepali social media users. Lately, a video claiming that the US has finally announced the withdrawal of MCC from Nepal, is going viral on TikTok. Newschecker found that the video is manipulated by using various images of Nepali leaders overlaid with a false audio clip.

The claim is the latest in a series regarding the approximately NRs 55billion rupees US aid that has drawn the attention of the entire country. The US grant meant to build transmission lines and road networks has sharply and conspicuously divided Nepali society and political class—those for and against approving the aid.

Supporters of MCC have been advocating that it is the biggest grant for a specific project in Nepal and should be approved, while its detractors are arguing that the aid is part of the US’s Indo-pacific strategy and undermines Nepal’s sovereignty.

The latest claim comes in the wake of Washington’s warning that it would be forced to review its ties with Nepal if the Nepali political leadership fails to honour their commitments signed nearly five years ago. The agreement registered in the Parliament in 2019 has been stuck due to the political parties’ failure to arrive at consensus. The US has given a deadline of February 28 for the ratification of the MCC Nepal Compact.

The video posted on February 9 has garnered 12.1k likes, and 449 shares, while 441 users have commented on it until the time of publishing this article.

To check the authenticity of the video, Newschecker began by clicking on the audio of the clip used, a search that landed us on a page with all the videos using the same audio clip.

We found that TikTok user gorkhalithitto0 posted the first video carrying the voice-over. The video, displaying an image of foreigners apparently in a meeting, was also spreading equally fast with 4175 likes, 41 shares and 77 comments.

The audio clip has been used by 64 TikTok videos altogether to spread misinformation regarding the US decision on MCC Nepal compact.

Further, to find the original source of the video and audio, we conducted keyword search on YouTube for the words, ‘MCC’, ‘withdraw’, ‘US declaration’ in Nepali, which led us to a video with similar title, images and audio. The video uploaded on February 8 by Nepal Khabar TV on its YouTube channel was titled, “Good news, US announces to withdraw MCC from Nepal, cheers everywhere.”

We also checked the source of an image used in the video by using a keyframe search, which led us to the website of the US embassy in the Kingdom of Lesotho. We found out that the photo was of US Ambassador Rebecca Gonzalez and Lesotho’s Minister of Finance Moeketsi Majoro during the MCC Compact Development Grant Agreement signing on February 20, 2019. The images unrelated to the issues being reported.

Then we checked if the US government has dispatched any letters regarding the decision to revoke the MCC Nepal compact. However, we could not find any letters or documents confirming that the US has decided to cancel the aid in Nepal. Rather we came across the latest news report on the status of MCC published in the Kathmandu Post on February 10 that a senior US official called on the three top leaders of Nepal’s largest political parties and warned them of ramifications in case of failure to ratify MCC from Nepal’s parliament.

On analysing the audio further, we found that it does not attribute the claims to any sources, while it continues to rant about the contemporary issues facing the country and using click-bait caption.

Our findings so far indicate that the US has not scrapped or withdrawn the MCC and the YouTube channel from which the viral video took the video and audio is publishing click-bait contents and unsubstantiated claims.

The US government has not issued or dispatched any letter announcing to pull out the MCC aid project from Nepal. The video going viral on TikTok is fabricated by laying a false audio clip on top.

US embassy in the Kingdom of Lesotho