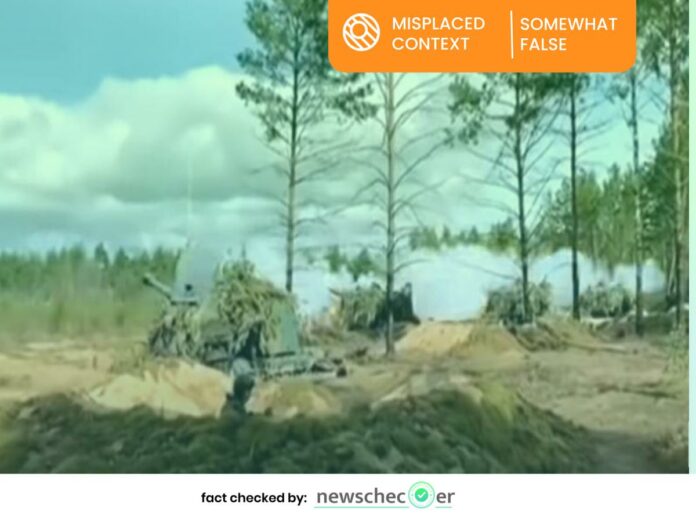 As the invasion of Ukraine by the Russian military has grabbed the global attention, social media platforms across the world are flooded with many unrelated and unsubstantiated visuals along with speculative claims about the attacks. One such video, purporting to show visuals from the ongoing Russian attack on Ukraine claiming that  “at least 15,000 people were killed in a single day”, is going viral among TikTok users in Nepal. Audio accompanying the video alleges that Nepal has decided to take the side of the NATO alliance and Ukraine. Newschecker found that the viral video is old and unrelated and is being spread to make unsubstantiated claims.

The world is anxiously following the latest developments after Russia launched a full-scale military attack on Ukraine, while China has accused the US of creating “fear and crisis” over the crisis in Ukraine.

Against this backdrop, TikTok user baranews1 posted a video showing visuals of military personnel, armoured vehicles, moving tanks and artillery firing. The video also shows a clip of Russian President Vladimir Putin and Nepal’s Minister for Information and Communication Gyanendra Bahadur Karki. Audio accompanying the video which is presented in a news bulletin style says, “Russia has deployed thousands of tankers and 200,000 army personnel in Ukraine; NATO alliance raises objections. Russia’s attack killed over 15,000 people, left many others injured. And the Nepal government stood in favour of the Ukraine and NATO alliance.”

What is Nepal’s Official Stand on #RussiaUkraineConflict?

Nepal has not taken the side of NATO and Ukraine as claimed in the video. In a statement issued on February 24 after Russian President Vladimir Putin authorised a military operation in eastern Ukraine, Nepal called on all parties concerned to exercise maximum restraint not to escalate tensions in the region. “As a member of the United Nations, Nepal views that the principles of sovereignty and territorial integrity as enshrined in the UN charter are sacrosanct and must be fully respected by all member states,” the statement reads.

To check the veracity of the claim, Newschecker conducted a Google reverse image search by taking key-frames of the video and found two videos—one depicting Russia’s Vostok 2018 war games and another showing Zapat drill 2021—containing visuals resembling the viral video.

Vostok 2018, held in Russia’s far east was said to be the country’s largest military training exercises since the Cold War, while Zapad 2021 was a week-long joint military exercise by Russian and Belarus on NATO’s borders as part of their efforts toward integrating the nations and creating a single defence space.

Further, we googled to check the death toll in the Russian attack on Ukraine. BBC quoted Ukrainian President Zelensky that 137 Ukrainian citizens – both soldiers and civilians – died on Thursday. No other agency has estimated a single-day death toll to be around 15,000.

Since the audio accompanying the video sounds familiar to us, pointing towards the YouTube channel of Greater Nepal TV, which is notorious for peddling false and unsubstantiated claims surrounding burning contemporary issues related to national and international politics. We found a news bulletin video, posted on Greater Nepal TV’s YouTube Channel on February 24, containing the same audio used in the viral video. On analysing the video, we found the portion of the video from the 0.52-minute to 1.10-minute timestamp identical to the viral video.

The video claiming to report about the Russian attack on Ukraine shows old visuals of military drills of Russia, makes unsubstantiated claims regarding the death toll in Ukraine, and falsely claims that Nepal has taken the side of NATO.

The US Sun
BBC News