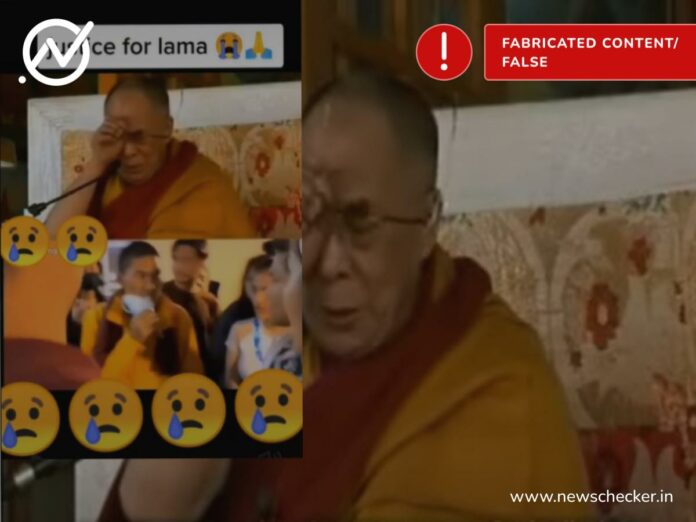 A video purportedly showing Tibetan spiritual leader, the Dalai Lama, moved to tears, allegedly over the recent controversial incident of an actress slapping a Buddhist monk is going viral on Nepali Tiktok. Newschecker has found that an old and unrelated video of the Dalai Lama is being falsely linked to the controversy that created outrage in Nepal.

What is the slapping controversy?

Nepali cine artist Miruna Magar courted controversy recently after she slapped Phurba Tamang Lama, a Buddhist monk hailing from Mugu district, accusing him of “touching her inappropriately” on May 29 during an event at Civil Mall in Kathmandu. Lama was arrested after the incident.

Magar, the lead actress of newly released Nepali movie, Kabaddi 4: The final match, was holding an interaction with fans after attending a screening of her film at the QFX Cinema located within the mall.

Lama’s arrest by the police sparked mixed reactions on social media regarding Miruna’s actions and also led to protests outside KL Tower. As videos related to the incident were shared on social media, many from the Buddhist community and related organisations expressed outrage over the issue alleging that the actress was levelling false accusations against the monk.

What did social media users say?

Against this backdrop, TikTok user @santoshgole741 posted a video, showing the Dalai Lama welling up, followed by the visuals of Magar pointing finger at Tamang. The video, which has been edited to include and emotional background score, carries the text, “Justice for Lama [Monk].” The video purports to claim that the Dalai Lama, who has been living in Dharmasala in Himachal Pradesh of India, shed tears over the incident that happened in Nepal.

The video posted on May 31 has been liked 158.5k times, shared 1,469 times and 5,166 people have commented on it until last count. The audio and the video have been used by many other users to make a duet on TikTok.

To check the authenticity of claims made in the viral video, Newschecker conducted a google search on YouTube using keyword ‘Dalai Lama crying’ and found a video whose frames matched the viral video. The video was posted on the YouTube channel named Psykedelia on 21 July 2015. The video caption reads, “H.H Dalai Lama’s started crying while teaching about the great virtues of Bodhicitta 2011.”

On looking further on google by using the same keyword, Newschecker found another video, exactly matching the frames of the viral video, posted on YouTube Channel named ‘Tenzin Wangyal’. The video was posted on the YouTube channel on September 24, 2012. The video caption reads, “HHDL talks about the importance and benefits of Bodhichitta.” However, we couldn’t establish exactly when the Dalai Lama was filmed crying while giving the sermon.

What’s the status of case now

Eventually, the case was settled on May 31 and Lama was released after both parties reached an understanding. While Tamang conceded to his mistake and apologised for his misconduct, the actress issued an apology to the Buddhist community for the damage caused by her reaction.

In an agreement letter signed by Tamang and Magar, both sides  agreed to not make any unnecessary remarks about the issue in future and called on the concerned stakeholders not to allow the spread of religious and communal hatred.

The viral video purporting to show Tibetan spiritual leader, the Dalai Lama, shedding tears over allegations of injustice done to a Buddhist monk in Nepal is false. The video is old and shows the Dalai Lama overwhelmed with compassion while teaching about the virtues of Bodhichitta.