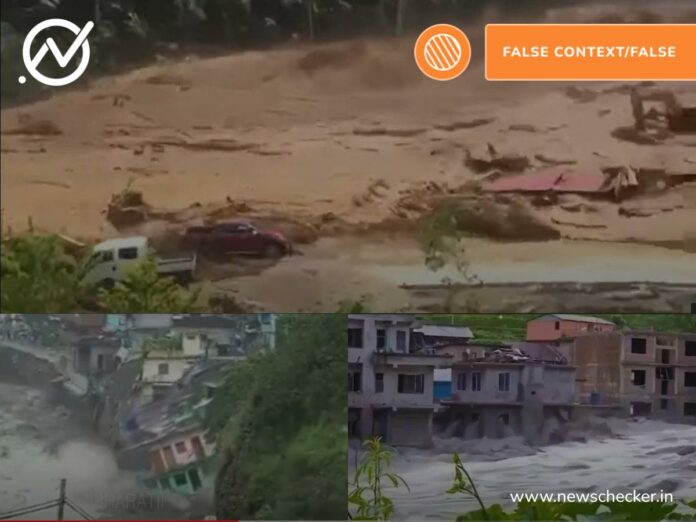 With the annual Monsoon season beginning in Nepal a month ago, many unverified contents claiming to show the devastation caused by the rain-induced disasters are being widely shared online. In light of this, a 10-second video purporting to show raging floods wreaking havoc in Nepal’s Rupandehi district, is going viral on TikTok. Newschecker found that the video is false and unrelated.

TikTok user @AngadPrasadSahani posted a video, showing visuals of floods in different locations, and one of the footages shows the moment where a number of houses can be seen collapsing in a river bank due to a flash flood. People can be heard crying and calling out to each other to run towards safety. Text superimposed on the video reads, “Floods in Marchawar of Rupandehi district of Nepal have caused a huge loss of lives and properties. Date: 2079/3/15 BS [June 29, 2022]. Oh God, please save Marchawar.” Newschecker investigation found the claim to be false and misleading.

The video posted on July 6 has garnered 154 likes, and 1share and two people have commented on it.

To check the authenticity of the claim, Newschecker closely observed the video and found that it carried three different footages. We split the video into multiple keyframes and conducted a reverse search on Google.

Newschecker closely analysed the first video. A reverse image search on the keyframe from the footage led us to a video posted on the Facebook page of NTV Nepal. The frames of the video titled ‘Flood in Sindhupalchok Nepal destroyed many homes in 2021’ exactly matched the viral video. The video was posted on June 19, 2021. Though the video carried the logo of Nepal government’s national television, the poorly written text and the logo of Nepal Television (NTV) raised doubts about the validity of the video.

On scanning the page thoroughly, we found that the page is not the official page of Nepal’s national television.

We further searched on YouTube using the keyword ‘Sindhupalchok Helambu flood’ which threw up several results. On checking a video posted on YouTube by a user Purnika Shah on August 5, 2021, we found that the initial frame matched the first footage seen in the viral video. Thus, we can conclude that the video shows the flash floods that hit Helambu and Melamchi of Sindhupalchok district in June 2021.

Further, to find the source of the second footage, we conducted a reverse image search on google with a keyframe, which threw up several results, hinting us towards the floods in Uttarakhand. So, we conducted a keyword search on YouTube using ‘Uttarakhand flood’ and found a video whose frames matched the second footage of the viral video. The video posted on the YouTube Channel named IIBHaratII shows buildings being washed away by a flooded river in Uttarakhand in 2013.

Likewise, we conducted a google reverse image search on a key frame from the third footage seen in the viral video. The search led us to a video, whose frames matched the viral video, published on a Chinese website. With the help of google translate, we found the clue that the video is showing the flash floods in Laos. Further, we looked for footage depicting floods in South East Asian nation Laos and found a video whose frame from the 0.52-minute timestamp matched the viral video. The video uploaded by Daniel García-Castellanos on September 11, 2017 shows flash floods after the reservoir of the Nam Ao Dam in Phaxay District in northeastern Laos was breached following heavy rains.

On further research, we didn’t find any reports of any recent floods in Rupandehi district.

The video claiming to show footage of devastation caused by floods in Rupandehi district is old and shows a combination of three videos showing the 2021 floods in Helambu, 2013 floods in Uttarakhand, and 2017 floods in Laos.