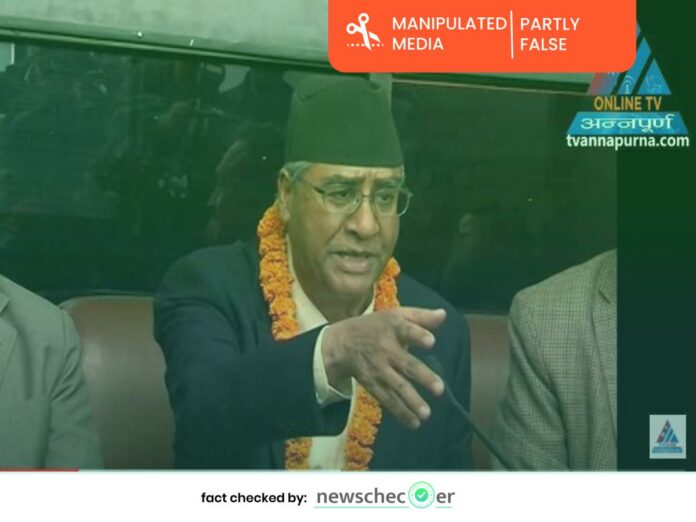 As the February 28 deadline for parliamentary ratification of the US grant under Millennium Challenge Corporation (MCC) draws closer, many fabricated contents and misinformation regarding the US aid project are going viral online. A video purporting to show an argument between Prime Minister Sher Bahadur Deuba, who is also the president of Nepali Congress party, and his coalition partner CPN-Maoist Chairman Pushpa Kamal Dahal over the issue of MCC has gone viral on TikTok. Newschecker found that the video is fabricated.

The MCC is a Rs 55 billion rupees million US grant to upgrade Nepal’s electricity transmission grid and road networks.  A raging debate is underway in Nepal over whether the MCC compact should be ratified by Nepal’s parliament, with critics arguing that the US grant is against Nepal’s national interests and part of the US’s Indo-pacific strategy. Meanwhile those in favour of the aid point out that it is the single largest aid project for Nepal, and there is no harm in ratifying the compact by the parliament. The two major partners of the current ruling coalition–Deuba led Nepali Congress and Dahal led CPN-Maoist–are on the verge of split due to the differences over ratification of the US grant, while the MCC Department of Compact Operations has warned of ending partnership with Nepal for delaying its ratification from Nepal’s parliament.

Against this backdrop, TikTok user mr_ross33 posted a video which shows Prime Minister Sher Bahadur Deuba addressing a press meet. In the video, PM Deuba is heard saying, “People will call us murderer and dacoit, if we ratify the MCC. But there is the question of 55 billion rupees, we can’t give up on such a huge amount. The amount can’t be included in a calculator. That’s the reason why people call us crooks.”

The video further shows CPN-Maoist Chairman Pushpa Kamal Dahal speaking to a mass, “Friends! Do you think it is true? No, that’s wrong.” Then the video shows visuals of Deuba retorting back, “Shut up and don’t interfere while I am talking. People also call you a murderer of 17,000 people. Don’t try to act smart!”

The video has garnered 4,743 likes and 362 people have shared it until the time of publishing this report.

To check the authenticity of the video, Newschecker began by searching for the original source of the visuals showing Prime Minister Deuba speaking. We ran a keyword search for ‘Sher Bahadur Deuba press meet’ on google but couldn’t find any related video. As PM Deuba is seen in a belligerent mood in the video, we conducted a keyword search for ‘Sher Bahadur Deuba angry’ that led us to a video bearing close resemblance to the viral video.

We found that the video uploaded on YouTube channel of TV Annapurna on November 9, 2016 was from a press meet in Kathmandu after Deuba arrived from a visit to India. The original video revealed that Deuba lost his cool after journalists questioned about his meeting with the Dalai Lama. The claim made in the viral video is not related to MCC and the voiceover used in the video is edited over the visuals.

Further, Newschecker searched for the visuals of CPN-Maoist Chairman Pushpa Kamal Dahal, which is linked with the apparent statement of PM Deuba regarding MCC.  In the visual, Maoist Chief Dahal seems to be responding to the fake voice of Prime Minister Sher Bahadur Deuba.  The viral video shows Dahal saying, “Friends! Do you think it is true? No, it is wrong.” Looking for the original source of the visual on YouTube, we ran a keyword search for ‘Pushpa Kamal Dahal speech’ and came across a video posted on the YouTube channel of Deshsanchar.com on December 10, 2021 and edited for clarity.

On analysing the video, we found that the audio clip of Pushpa Kamal Dahal was aimed at the newly elected Chairman of Rastriya Prajatantra Party during the 14th General Convention of Nepali Congress in Kathmandu, and was not related to the MCC.